The God Of High School Wiki
Register
Don't have an account?
Sign In
Advertisement
in: Weapons
English

Chapter 108
Ruyi Jingu (a.k.a. Yeoui) is a sacred weapon that is used by the Monkey King of the Nine Kings.

The Staff, together with Kinto-Un and Gourd, forms Weapon of the Three Gods, The Monkey King's Weapons of Choice.

After RagnarÖk, Ruyi Jingu has been broken into two pieces, with one of them embedded at the centre of the main battleground, Korea, now obliterated and become a sea. The other piece falls in possession of Dan Mo-Ri.

The Yeoui takes the appearance of a stone-looking bo staff. In the First Heavenly War, Yeoui had a gold band on each end.

Yeoui was the weapon that the Dragons created from the hip bones of Orge, the first and strongest dragon, but unlike other Yeoui, It wasn't enhanced by Yeouiju in fear of Orge's power and rage. It was later held in the Dragon King's Palace to measure the east sea level. The Monkey King extorted it from the current Dragon King, Junior.[1]

When Uriel tried to pick up Yeoui (fake), she picked it up easily and thought it (real) was supposed to weigh 1,700,000 pounds or 80,000,000 tons. And when Mori Jin handed the real Yeoui to Uriel, her hands immediately got severed, implying that It was much heavier than Uriel ever anticipated.[2]

Ruyi Jingu is able to grow on command to what the owner says and is capable of killing thousands of angels and Nephilims instantly. A casual strike with Ruyi Jingu destroyed many angels at once, ripped Taek in half, and made a huge tsunami. The staff is also deceptively monstrously heavy, with few people besides the Monkey King being able to even lift the staff.

Size Alteration: Ruyi Jingu's size can be altered according to the Monkey King's will. It can grow broader or slimmer and taller or shorter at will. It can reach incredible lengths, as it was able to reach all the way from the other side of the moon to the earth which is 387874.8 km long.

Weight Alteration: On command, the staff can become lighter or heavier and the norm for the Monkey King is heavy by many people standards, just placing it onto the floor was able to create cracks in the ground that reverberated up a gigantic hole up to its surface. Making it lighter vastly increases movement speed. (Max weight unknown)

Levitation: Ruyi Jingu can levitate itself a certain distance from the ground, to the point that It can be controlled remotely.

Summoning: The staff can be summoned into its wielder by moving at incredible speed, destroying everything in its path.

Cloning: Ruyi Jingu can make multiple copies of itself along with The Monkey King's own copy. The clone's staff is vastly weaker, however, as it is easily cut through and broken by Blade of Tathagata, while the original was durable enough to withstand its cutting power. When the copy of Ruyi Jingu held by Hui Mo-Ri is broken to pieces, it can regenerate.

Enhanced Durability: The staff is incredibly durable, with few if any attacks able to break the staff. So far only First Crown Prince using Lightning Blade, The King using his Blade of Tathagata, Satan, and a few items from Maitreya can do so.

Teleportation: Ruyi Jingu can be teleported back to The Monkey King's location at his command.

Yeoui is made from the backbone of dragons and each dragon bone has a unique function.

Of the 19 Yeouiju offered by the Dragon King during his trial, Dan Mori has obtained all 19 of them. Being imbued with the dragon's magic and souls, these pillars have even greater durability and power compared to Dan Mori's original Yeoui, despite it being from the strongest dragon in history.

A full view of Ryui Jingu 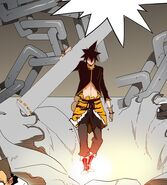