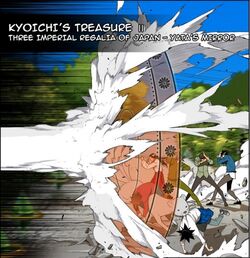 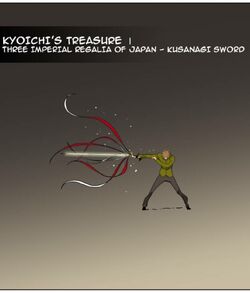 Three Imperial Regalia of Japan is the National Treasure of Kyoichi Kusanagi.[1] So far, only two have been shown, the Kusanagi Sword and Yata's Mirror.

Takes the appearance of a long sword extended from within Kyoichi's hand with ribbons of blood surrounding it. When fully equipped, the sword changes form into seven branched-sword

Shielding: Yata's Mirror provides nearly absolute protection from direct attacks. However, with extremely powerful attacks such as Dante's Energy Wave, it can be broken.

It acts as a measure of control against Yamatano Orochi that has been sealed inside the firstborn son of Kusanagi clan.[2] It is considered a god-slaying weapon.

Summoning: When slashing something, the sword can summon Yamatano Orochi out of the slash. This is the result of Kyoichi Kusanagi having Yamatano Orochi sealed inside his body.

Retrieved from "https://godofhighschool.fandom.com/wiki/Three_Imperial_Regalia_of_Japan?oldid=26973"
Community content is available under CC-BY-SA unless otherwise noted.