Ssam-Su Taekkyeon (literal meaning : Wrapped-Way Taekkyeon) is a type of martial art developed in modern South Korea. It is used by Park Il-Tae and Park Il-Pyo in the series. It is emphasised in strong, fast kicks like its base Renewal Taekwondo and Practical Taekkyeon. Some skills are directly linked with Renewal Taekkwondo, skills involving Hwechook for example. Others are linked to Practical Taekkyeon, like skills involving armwork and whole body techniques.

Park Il Pyo's grandfather, Park Il-Tae, was a soldier in the same squad as Jin Tae-Jin. When Operation Gilgamesh was being executed (35 years before the story begins), Jin Tae-Jin and his squad were taking a break avoiding an enemy. He then saw one of his corporals, Park Il-Tae, writing letters to his son and wife. The letters were revealed to be Park Il-Tae's effort to combine Practical TaekkyeonLine Translation: Yeotbeop Taekgyeon with RE Taekwondo to reinforce the weakness and strengthen it, which made Jin Tae-Jin scold him for not asking permission first. However the corporal was killed the moments after, prompting Jin Tae-Jin to swear that he would give his letter to his son and permit Park Il-Tae to pass on RE Taekwondo. The letter never went to the corporal's son who died of mysterious causes and instead, it made it to his grand son Park Il-Pyo 20 years after. With Jin Tae-Jin's encouragement to become as great as his grandfather, Park Il-Pyo rose to become the first master of Ssam-Su Taekkyeon. 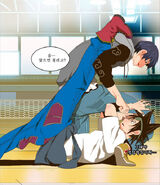 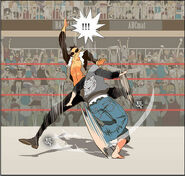 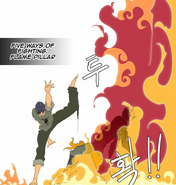 Like Taekkyeon it employs many take downs the knock the opponent off their feet by kicking the foot or grappling in a certain way to trip the opponent, it also uses the same breathing noise as taekkyeon which is a distinctive "ieek" and "Eek" (the latter is longer sounding word) and wide variety of kicks. RE Taekwondo's influence is also seen with it's "hook" kick take down.

Retrieved from "https://godofhighschool.fandom.com/wiki/Ssamsu_Taekkyeon?oldid=33161"
Community content is available under CC-BY-SA unless otherwise noted.