Leader of the National Assembly of the Homeless

The Six
National Assembly of the Homeless

Seo Han-Ryang (서한량, Seohanlyang) was a member of The Six. He was the 27th leader of the National Homeless Association prior to giving that title to Yu Mi-Ra. He is an advanced weapons expert, capable of using 108 National Treasures.

He was dressed in a standard homeless outfit; a worn out hat, an old coat over a jacket and a shirt. His eyes are rarely seen beneath his bangs. He has brown-purple hair in a ponytail and slight stubble on his chin.

He was usually seen lugging around his various weapons around with him in a cart.

He had a mischievous personality and was quick to take money from Jin Mo-Ri and Jin Pum-Gwang's wallet and started fighting when they tried to take it back.

Before his fight with Jin Tae-Jin, Han-Ryang was rather arrogant and temperamental. This earned him the nickname, 'The Hulk' among the Six.

Unknown years ago Seo-Han-Ryang was appointed as 27th leader of the National Homeless Association and received Gáe Bolg, a weapon that he would mastered the most among his 108 National Treasures.

17 years ago, The Six fought Jin Tae-Jin and defeated, sinking 10% of south korea in the process. After this humiliating defeat, He lost his arrogance and temprament, becoming much calmer and mischievous.

At the end of the preliminaries, Park Mu-Bong summoned the six, one of them is Seo Han-Ryang who was busy begging.

Seo Han-Ryang was begging for alms in Seoul Station when Metropolitan teams arrived.Jin Mo-Ri wanted to give him ‎₩1000, but he took ‎₩50.000 by his staff, playing with Mo-Ri who was trying to take it back. then he took Jin Pwum-Gwang's ₩50.000 too, causing the the victims to tag-team. Jin Mo-Ri finally resorted to his acupuncture, but Han-Ryang somehow negated its effect and hit him in the head. He gave back Pwum-Gwang's money and took Mo-Ri's for his 'injury'. The money was used to bought food for his subordinates. He then wondered why Na Bong-Chim teach Jin Tae-Jin's grandson his personal fighting techniques.

During verbal sparring between Park Mu-Bong and Bong-Chim he arrived to The Six's meeting, calling them out for arguing which is the best, Charyeok Group or Strength Group.

When Sang Man-Duk used a nephilim to attack Bak Mu-Bong, Han-Ryang and his homeless subordinates destroyed the nephilim's sword.

Han-Ryang was a member of The Six, a very strong martial artist and a non-Charyeok user. He was easily able to fight off Jin Mo-Ri and Jin Pum-Gwang, though later he claimed that he was slightly injured. Later, he showed an instance of his true ability by fighting Hui Mo-Ri, a copy of a god who was using his full power, and manage to injure him badly, although he lost. During advent of the gods he fought Zeus, a Heavenly Realm's god, and managed to injure him, albeit barely.

Superhuman Agility: Due to the natural strengthening of his body from being a genuine fighter, he was agile enough to get away from Hui Mo-Ri, a copy of a god. His agility also allowed him to fight Zeus for a while.

Superhuman Strength: Seo Han-Ryang showed some instance of having a strength well beyond normal fighters, due to the natural strengthening of his body from being a genuine fighter. Coupled with his mastery over National Treasures and martial arts, it allowed him to damage body of a God as durable as Zeus, albeit barely.

High Intelligence: He had shown to have accurate deductive abilities, as he was able to quickly figure out the weaknesses of Jaecheondaesong Mode in the middle of a fight and use it to his advantage. He also managed to put a grenade inside Zeus' mouth by sacrificing his hand, knocking a tooth from the god's mouth.

Han-Ryang's fighting style was called Pumba. This style covered a variety of weapons, including but not limited to: staffs and swords. Some of them he taught to Jin Mo-Ri, Hui Mo-Ri, and Yu Mi-Ra. This style allowed him to seemingly bend his weapon in impossible ways, as he demonstrated with his staff.

Han-Ryang fought using 108 National Treasures. These included swords, staffs, bazookas, grenade, blades, axes, lances, rifles and spears. He was very skilled with these weapons as he, along with his subordinates, were able to destroy the sword made by Sang Man-Duk, which even Mu-Bong was having trouble stopping. He also created his own styles for each weapon type that he taught to Jin Mo-Ri, Hui Mo-Ri, and Yu Mi-Ra. They were collectively called Hallyang Style Pumba. All of his national treasure, sans Gáe Bolg, was broken when he loaned them to Hui Mo-Ri during fight against The King in Dante's body.[1]

A wooden staff that Han-Ryang used the most during his fights and one that symbolized his status as leader of National Assembly of the Homeless. Despite its rather plain look, in Han-Ryang's hand it could even hurt a God's body. 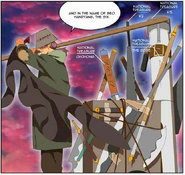 Retrieved from "https://godofhighschool.fandom.com/wiki/Seo_Han-Ryang?oldid=26930"
Community content is available under CC-BY-SA unless otherwise noted.