The God Of High School Wiki
Register
Don't have an account?
Sign In
Advertisement
in: Priest, Articles under construction, Characters,
and 4 more

Saturn has a quiet personality due to the fact that her mouth is always closed. As soon as her mouth is opened, she starts cursing non-stop, though the reason is unknown. She is also short tempered and lost her cool when her attacks had no effect on Judge O.

She was first seen with a group of Priests when trying to fight against Jin Taejin, but couldn't do anything and later on the Bishop had to fight himself. However, after the Bishop loses to Jin Tae-Jin, they overwhelm him with their sheer numbers.

She, along with Axley was assigned the task of defeating and killing Judge Q. They both change their clothing to a more casual one in order to mix in the crowd. Later on they both arrive at Q's house only to find a barrier outside and realise that someone is already inside the house. They enter the house and save Drake McDonald from getting killed by Q.

After the arrival of O, Saturn fights him. She attacks him with her gun, but he effortlessly dodges only to be attacked physically by the gun. After O removes his limiter, Saturn attacks again, but this time the attack had a much larger scale. She then attacks from behind by using her Charyeok, but O easily defeats her it. She loses her temper and attacks him head on, only to be slashed by O's dragon slayer sword.

As a Priest, Saturn is an able fighter. She is also able to use Charyeok.

Sadie : This is Saturn's Charyeok. It has the appearance of a woman with her eyes covered. It uses enemy's shadow to summon hands to attack. It can summon a whale like creature to attack from behind.

Original Greed: as part of Morning Crows, an assembly of believers and priests that supported R as the next jade emperor, Saturn was granted the original greed, one harvested from R's own body.

Saturn is in the possession of a National Treasure that looks like a cross shaped gun for combat. There is a hole at the bottom of the cross from where she shoots. 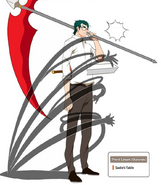