The God Of High School Wiki
Register
Don't have an account?
Sign In
Advertisement
in: World of God of High School, Locations

Sage Realm (동승신주 (신선계), Dongseungshinju (Shinseongye)), also known as the Demon Realm, Taoist World, or Other World, is one of the three known realms in The God of High School. It is populated by various mythical creatures, spirits, and monsters who are collectively known as Demons. In the hierarchy of worlds, it is higher than the Human Realm but lower than the Heavenly Realm. The great sage Sun Wukong hails from this realm. Nearly one thousand years ago, the Sage Realm and the Heavenly Realm had a war, which the Sage Realm lost.

The Sage Realm is a planet in another dimension that is home to many powerful creatures of legends like minotaurs and dragons. It seems to be divided into various countries, but how it is divided and who rules it is unknown. In the past the demons challenged the gods of the Heavenly Realm, they were led by the Monkey King, Sun Wukong. They were defeated and somehow Sun Wukong ended up on Earth as an infant encased in a crystal.

The Ore Country (오래국, Olaegug; "Oraeguk") is one of many countries of the Sage Realm. It is home to many creatures and was once ruled by Jin Mo-Ri. It is a large nation that lies in the northern hemisphere of the planet.

At the center of this country lies the Kingdom of Ore (오래국, Olaegug; "Oraeguk"). The kingdom is in the craters of four mountain summits. The main city is connected to the other cities by tunnels running through the summits. It seems the kingdom is at war with the surrounding areas of its own country due to them being prisoners of other creatures. This kingdom was ruled by Jin Mo-Ri in the past but is now ruled by an impostor pretending to be him, called Mihu.

Not much is known about King Uma's Castle (우마왕 성 (牛魔王城), Uma-wang Seong; lit. "Cow Devil King Castle") or the section of the Ore Country it inhabits except that it is ruled by minotaurs and their King, Uma. The entrance to the castle is a large brick gate with wooden doors and the top of the castle itself is designed with a bull's head and a sign below it.

As the name suggest it is a garden located in the Ore Country of Sage Realm. Nothing much is known about this place except that it is quite large consisting of a pond and a gazebo with quite a lot of greenery (plants, trees, etc).

The Kings are the rulers of the Sage Realm. They each rule a section of the realm and commanding up to hundreds of thousands of soldiers. They are immensely powerful easily killing various gods of the Heavenly Realm. Each King despite being a creature of the Sage Realm is a God. They joined a brotherhood together over 600 years ago calling it the Nine Kings.

The Royal Guards are the personal bodyguards of the Kings of each section of the Sage Realm. They are the strongest soldiers of the nation as they are tasked to protect the king from the enemy.

Soldiers are the masses that make up the military might of each nation. They number in the hundred thousands per race. 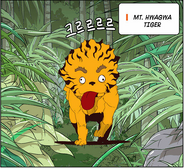 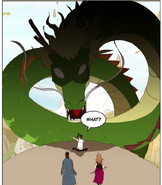 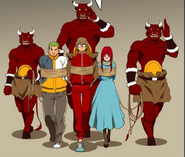