Park Seung-Ah is a participant of G.O.H Tournament. She was the runner-up in the Jeonranamdo regionals. She is Park Il-Pyo's cousin and in his team.

Seung-Ah has a long brown hair tied into a ponytail. She wears some kind of modified traditional 'dobok', a type of cloth you wear for certain martial arts.

Not much is shown about her personality. She is enraged when she catches the sight of Taek, because her sister was attacked and crippled by him. She also seems to be close to Il-Pyo. Due to ll-Pyo taking the blame for breaking a pot when both of them were kids, she has taken a liking into him.

For comic effect, it is shown that she has a soft spot for attractive men, a trait displayed when she quickly had a nosebleed upon Park Il-Pyo's transformation, even giving a thumbs up in approval at his new appearance.

Trained in martial arts since her childhood, Park Seung-Ah grow up to become a strong fighter. She's shown to be a strong competitor in G.O.H. Tournament, able to hold her own with Jin Mo-Ri for a while. She has high accuracy and speed and knocks out Nam-Goong Do with 800 HP left with one strike to the chin.

Superhuman Endurance: Seung-Ah has shown remarkable endurance and stamina. Several times she has received massive injuries from opponents only to continue fighting despite pain and fatigue.

Superhuman Agility: Due to the natural strengthening of her body from training with her grandfather she has superhuman agility. She is agile enough move any any position as he sees fit. She has shown the ability to effortlessly flip and jump around a fight using most surfaces to his advantage.

Superhuman Strength: Seung-Ah has shown strength numerous times throughout the series during many fights. Seung-Ah has blown apart arenas.

Superhuman Speed: Seung-Ah has shown remarkable speed. Several times she has closed the distance from opponents and appear near them in an instant. 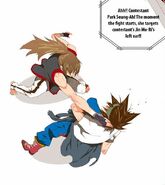 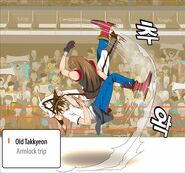 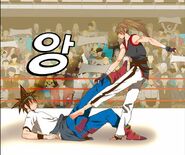 Monster Serpent Strike
Add a photo to this gallery
Retrieved from "https://godofhighschool.fandom.com/wiki/Park_Seung-Ah?oldid=29137"
Community content is available under CC-BY-SA unless otherwise noted.