Pandora is the Charyeok of Lee Soo-Jin. It is extremely powerful as it allowed her to beat Uma with a few attacks.

A long time ago there was a woman entrusted by a god. God gave her a box and told her to never open it. Unable to resist her curiosity, she opened the box, and the pain, suffering, and disease trapped inside all escaped. She finally realized it then that she was created as a punishment for that "Blessed Day". She also swore back then, that she would use the powers the gods gave her, to eliminate them... with the box she was given... some gods gave her power... some gods gave her irresistible charm... others gave her cunning and another gave her the most beautiful clothing... the first woman ever. One who was created to punish her fellow mankind. The one who had been gifted the best things from the gods since birth.

It was revealed that she was created by Hephaestus (just like in the original myth), at the request of Zeus.

Pandora gives her user a wedding shawl with goat ears. It also gives her thigh length hair and Pandora's box which is black and red. She can also call armor onto herself which manifests itself as a blue armor that reveals her thighs.

Pandora is one of the only Charyeok that changes the appearance of its user, besides Yu Mi-Ra's Yeo-Po Bong-Seon and Park Il-Pyo's Nine-Tails Guardian. It is one of the most powerful Charyeok seen to date. It is so powerful that not even Uma could defeat Lee Soo-Jin.

Ability Sealing: Being one of the keys it has the ability to seal away a god's ability carrying them on a lower plane so they can be hurt. It can also seal away a person's Charyeok like what she did to the Judges. However, this ability does not work on powers that use multiple individual charyeok's, such as Dragon Slayer.

Ability Awakening: Being one of the keys it has the ability to awaken the potential within a person to enable them to attack gods, nephilim and higher, that they couldn't previously hurt. It can also undo the seals it placed on gods.

Physical Enhancement: It greatly enhances all of its user's physical attacks, speed and power to the point where it can no longer be traced with the naked eye.

Toxigenesis: It gives her the ability to generate and create various poisons ranging from acids and knock out gases.

Pathogenesis: It gives her the ability to generate and create various diseases ranging from fever, blindness, cold etc.

Power Reflection: It has the ability to reflect any attack aim at the user whether it is physical, charyeok or otherwise. Even though she was able to completely reflect the charyeok powers of other human characters however, she was only able to redirect the First Crown Prince's attack slightly.

Armor: Through the use of Pandora's box Soo-jin can invoke an armor onto herself. She has two stages of this armor.

The Hope: Sovereignty: This is assumed to be her strongest technique, it allows Soo-Jin to affect the laws of physics in the affected area. The user also grows wings on their back during the usage of this technique. "The hope allows the user to become the god (sovereign) of the affected area." 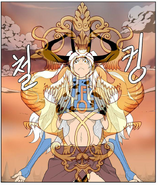 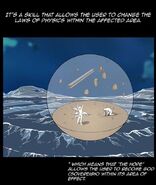 Explanation of Hope Sovereignty
Add a photo to this gallery
Retrieved from "https://godofhighschool.fandom.com/wiki/Pandora?oldid=33340"
Community content is available under CC-BY-SA unless otherwise noted.