Pacho Fan is a sacred weapon that is been used by Uma of the Nine Kings. After Uma's body was destroyed and she ate the Greed Staff, it was reforged with the material, Barbadium.

The Pacho Fan has the form of a green Gunbai, an army fan used in Japanese military in the past. It now has the appearance of a luminescent metal bat that can be opened at the edges releasing the blades.

Pacho Fan is a weapon said to be on par with Ruyi Jingu Bang that can only be used by Uma. The Pacho Fan can be called on command. A casual strike with Pacho Fan destroyed the castle of the monkey king as well as split the Ore Kingdom in two.

Aerokinesis: The Pacho fan has the ability to manipulate wind. A simple swing in its pre-transformed state was able to split the castle and a large part of the kingdom in two. When used, it creates a vaccum around the user, depriving anyone including the user air to breathe.

Wind Blades: After it was reforged it was capable of creating concentric blades made out of wind capable of cutting through mountains. 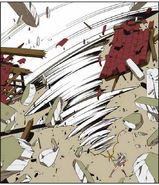 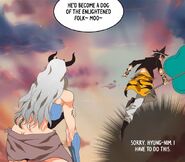 pacho used by Monkey King
Add a photo to this gallery

Retrieved from "https://godofhighschool.fandom.com/wiki/Pacho_Fan?oldid=23186"
Community content is available under CC-BY-SA unless otherwise noted.