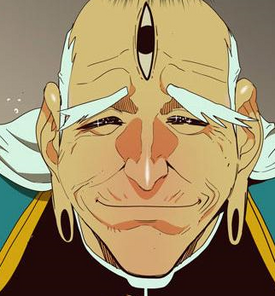 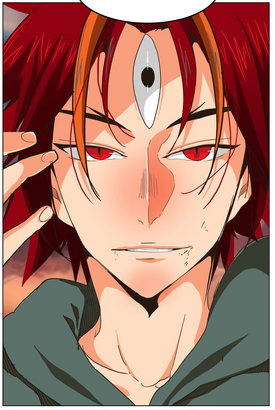 Chapter 165 (shadowed)
Chapter 166 (Full Appearance)
The King or Okhwang was the main antagonist for the first half of the series, the leader of Nox, and the original holder of the title Jade Emperor.

The King's appearance was that of an elderly balding man with white hair and elongated earlobes much like the Buddha. His eyes were almost always seen closed, and when opened it showed red eyes. He wore a Nox uniform and used a walking stick.

When he was younger, he appeared similar his 'son(s)' Dante, possessing long flowing red hair with uplifted dark red bangs and a youthful visage. His right eye had the Ω symbol in it, while his left eye had the α symbol in it.

After transferring himself to Dante he regained his youthful visage. As he was simply within Dante's body, he was identical to Dante except he now possessed the same third eye visible on his original body.

The King had been shown to be cunning and unrelenting. He was able to figure out what Oong-Nyuh was plotting when she suggested the cease fire, while taking notice of Sang Man-Duk's hasty and abrasive suggestions. He was quick to attack and subdue others that showed resistance or disrespected him such as when he attacked Han Dae-Wi for blocking him or when he choked Man-Duk for talking back.

He also liked to play with his words, trying to sound charming or vague, such as when he tried to compliment Oong-Nyuh about her appearance, when he gave warning to Mu-Bong's want for unsealing his power, or when he promised his 'sons' whoever contributed the most would become 'the next' Jade Emperor. He often spoke like this with a smile.

He was an opportunist, seeing the individuality of the Monkey King's clone and using it to persuade him to join Nox while his original self was still trapped in the Sage Realm. He also used his descendant, Jegal Taek, as part of his experiments, with an excuse that he was more human than gods.

Like all the Heavenly Realm's Gods, he was very prideful. At one point he compared humans to caterpillars, meant to live of eating grass, not worthy to enter the realm of Gods. He was angered when Hui Mo-Ri come close to defeating him as he couldn't believe a mere monkey could make him feel fear.

Jin Mo-Ri noted that since his young days, The King always played his strength, sometimes appearing weak or strong. He often did this in front of others such as when he met Han Dae-Wi and his sister, appearing to be a frail old man while in truth he was a god. At the same time he was also shown to be quite perverted, exploiting his old state to grope Han Dae-Wi's sister's back.

During time he played Janggi with Han Dae-Wi he showed a competitive side. He lashed at Han Dae-Wi's dog for losing and later blew up the board with his third eye. He was also shown to be not above cheating in simple games, as he used his third eye to cheat in Janggi.

Despite all of the above, he was be a graceful loser, not finishing Hui Mo-Ri after the almost defeating him if not for the latter's body crumbling, instead he rewarded him and his allies with a chance of living.

He was also rewarding to those who caught his interest, even to his enemies. He give Han Dae-Wi a warning in advance so he withdraw from the match, stating that Han Dae-Wi's attitude and personality was what he liked and it would be a shame for him to die so young. Later when he saw Hui Mo-Ri's guts, something that had taken him off-guard, he decided to reward him and his allies even further by leaving the Human Realm for a hundred years, praising the current strength of humans.

Uriel mentioned that for a Heavenly Realm's god, the King was exceptionally merciful and generous to the humans; this was shown by the fact that he saved Xiao Chen from being stoned to death that earned him her absolute loyalty. He, himself, admitted that although he had no issue with divine punishment falling upon humans, he was against their senseless extinction. The gods saw this as the King's weakness.

After having his physical power absorbed by R left him on the verge of death, combined with being hunted by the other Heavenly Realm's gods for his Wisdom of the Sage, while being protected by his human followers and Seo Han-Ryang whom risked and gave their lives for him, the King showed genuine appreciation for their sacrifice and repaid it by reviving Han Dae-Wi and bequeathing his wisdom to the latter for him to protect them from the gods despite doing so costing him his life.

An unknown number of centuries ago, he introduced Kim Oong-Nyuh to Hwanung and Tathagata when the humans needed help from the gods. He was the one who proposed to the other gods to be left behind in the human world, in order to prevent Charyeok from running amok. He was present when The Monkey King fought Tathagata.

At some point in his life he began pursuing immortality, so he impregnated human women and fused their fetus' with Greed in-utero. Dissatisfied with the results, he scrapped the project and instead broke down the research into three: Rough Energy Stone, Dante, and Greed.

At unknown time in his youth he saved Xiao Chen from being stoned to death by other humans.

The King had shown himself in the Nox prison headquarters when the Monkey King returned from the Sage Realm and released everyone from the Gourd. Before anything could happen, he walked into the scene, causing everyone around him to be surprised. Han Dae-Wi quickly attempted to attack him but had his eye destroyed as a result.

When he chased after Il-Pyo who was attempting to find the real Jin Mo-Ri, while calling Il-Pyo "Fox", he referred to himself as his old master, before proceeding to 'punish' his former bodyguard. Mo-Ri rushed to the scene to find Okhwang having completely defeated the fox. About to finish him off with his blade, Mo-Ri intercepted his stab barely with his Ruyi Jingu Bang, and the two engaged in fierce battle.

Ohkwang stated his name, openly pouting his envy over Mo-Ri's still youthful appearance, realizing that his presence meant that the Mo-Ri in the Human Realm was a clone. The two's weapons collided again, and Okhwang remarked on The Monkey King's hot temperament before using his power to throw two planets at Mo-Ri. Mo-Ri apparently destroyed the two, but Ohkwang proceeded to pull over Il-Pyo's unconscious body and stab straight through the fox. Having finished his lion's share, he then left the two, exiting through a portal as his minions detonated around the hapless duo.

He was shown to be a very powerful individual, capable of fighting on par with The Monkey King and was hinted to be even more powerful in his younger days. Jin Mo-Ri mentioned that The King never once showed his true power in the First Heavenly War, even though it was said that he himself defeated The Monkey King and an army of twelve billion monsters at the same time. He was powerful enough to temporarily restrain a clone of the Monkey King while using his fundamental force manipulation to easily choke Man-Duk, despite his old age. Il-Pyo had taken notice of his strength as well, feeling a shiver when he walked down the halls. He also display an ability to unveil Bishop R's cloaking power.

Though his power is great, the king seemed to lacks regeneration powers.[2]

Some of his other powers and abilities included:

Physical Power: other times referred to as The King's Body, is a special form of transferable physical energy Jade Emperor had. It could be what powers his frail body during his later years and the means for the King to increase Dante's physical power after hijacking his body, as after this energy was taken he has trouble moving in his old body [3], despite previously seen to keep up with Hui Mo-Ri in his old body [4]. This, along with Wisdom of the Sage, powers his Fundamental Force Manipulation. The King lost this to Ultio R who "eat" it with Original Greed.[5][6][7]Odin revealed that obtaining physical power of Jade Emperor is vital, at least for a human, to use Wisdom of the Sage.[8]

Wisdom of The Sage: other times referred to as The King's Wisdom or Sage's Eye, is his third eye which holds abilities coveted by the Gods, as both Zeus and Odin and the rest of Second Heavenly Realm Gods excluding Garuda expressed their interest in obtaining it themselves. It, along with his Physical Power, powers his Fundamental Force Manipulation abilities. He gave it, along with his life, away to Han Dae-Wi.

Technique Mimicry: Similar to Jin Mo-Ri and Jegal Taek, the King had the ability to copy other people's martial arts techniques. It was seen the first time when he fought Hui Mo-Ri, where he replicated Renewal Taekwondo and Nabong Needle Ryu. Unlike Jin Mo-Ri, he didn't instantly 'copy' the techniques after seeing them the first time, instead he analysed and recreated them. He also mimicked the basics of Northern ITF Taekwondo to perform an improvised Northern ITF attack.[9]

The King was able to manipulate the four fundamental forces that govern the world: gravity, electromagnetism, strong nuclear force and weak nuclear force. He could use them to grant himself power that existed on the world to himself including, but not limited to, inertia, friction, acceleration and attraction. The King could also combine these power to create even more powerful techniques and attacks.

The King's Fundamental Force Manipulation was able to be sealed using the Holy Grail by Park Mu-Bong.

The King showed that he had copied several more styles, although it was not properly shown what techniques he had used:

With single swing of the Blade of Tathagata, King was able to slice the Earth from where he stood - somewhere in Korea - all the way towards an island across the continent. This blade was the same blade the King used to defeat Sun Wukong and his army of 12 billion monsters. The blade was destroyed during the fight with Hui Mo-Ri who used the real Ruyi Jingu.

The King's cane could act as a portal to Sage Realm, regardless of the spiritual power in the area. Kim Oong-Nyuh commented that the cane didn't consume much energy, but its activation was slower when used outside of sacred area.

Robe of the Sage

The Robe of the Sage was the official attire of the King, which he could summon out of thin air. This was not named until he used it to completely negate the destructive effects of the combined attacks of Lee Soo-Jin and Baek Seung-Chul, demonstrating its durability. The King stated that this robe had powerful resistance against physical attacks.

Retrieved from "https://godofhighschool.fandom.com/wiki/Okhwang?oldid=33651"
Community content is available under CC-BY-SA unless otherwise noted.