The God Of High School Wiki
Register
Don't have an account?
Sign In
Advertisement
in: Charyeok, Direct Contract

< Nine-Tails Guardian
View source
watch 01:36
We're Getting Mutants in the MCU - The Loop
Do you like this video?
Play Sound

Nine-Tails Guardian is the Charyeok of Park Ilpyo. It is extremely powerful as it allowed him to beat Jin Mori with a few kicks.

It significantly changes the appearance of its user giving them white hair and fox like eyes with red corners. It also changes their pupils into slits. This Charyeok also gives the user seven fox tails made of flames and fox ears on the top of their head.

The appearance and number of tails varies depending on the user. Using all 9 tails makes the borrower's hair longer and darker, as well as reddening their eyes.

Nine-Tails Guardian is currently the only Charyeok that changes the appearance of its user, besides Yu Mi-Ra's Yeo-Po Bong-Seon. It is one of the most powerful Charyeok seen to date. It is so powerful that not even Greed could contain it for too long on its first try.

Physical Enhancement: It greatly enhances all of its user's physical attacks, speed and power. This allows the user to strike, kick and generally attack an opponent to the point where it can no longer be traced with the untrained naked eye.

Ability Awakening: Being one of the Keys it has the ability to awaken the potential within a person to enable them to attack gods, nephilim and higher beings that they couldn't previously hurt.

Pyrokinesis: It also grants the user the ability to create and manipulate fire. Park Il-Pyo often summons foxes made out of flames or creates scythe like blades coming from his elbows to attack that is part of his Nine Tails transformation form.

Fox Generation: The user can summon many nine-tailed foxes ranging in size made out of fire.

Tails Activation: An ability gained by entering direct contract with with this legendary god. The user can gain the tails as a means to increase his power.[1] The greater the amount of tails activated, the greater burden upon the user's body.[2] 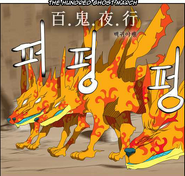 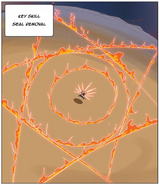 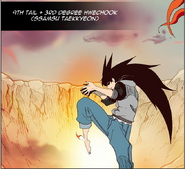