The God Of High School Wiki
Register
Don't have an account?
Sign In
Advertisement
in: Articles under construction, Characters, Male Characters,
and 3 more

Bodyguard of the Jade Emperor (Formerly)

The Nine Tails Guardian is a human-like being who is colossal in size he has white hair which is shoulder length fox ears, wears gray pants, and has nine fox tails which are flame-like in appearance. He is currently emaciated to the point that his ribs are visible, presumably through centuries of being starved and not having nutrition while in imprisonment.

He is a calm individual, however when betrayed he goes into a berserker-like rage as shown when he slaughtered many gods after he was betrayed by the Jade Emperor. He also seems to be very bad-tempered as seen when he told his assistant to attack Park Il-Pyo when he refused his offer of a contract.

Over a 2000+ years before the start of the GOH plot, he was a fox of the Sage Realm that trained for a 1000 years and finally became a god. After becoming a god he was allowed to live in the Heavenly Realm and even served in the royal court of the Jade Emperor as his bodyguard. During the war between the Sage Realm and the Heavenly Realm he was seen fighting the Monkey King although their fight was interrupted. However, the Jade Emperor and other gods began to fear the power that he, a mere creation they made, had and tried to killed him. In retaliation he ravaged the lands of heavens and escaped below.

He was too deeply wounded and his soul separated from his body and, while his body remained in the Sage Realm, his soul ventured to the Human Realm looking for a vessel to hold it until his body recovered. After hundreds of years of searching his soul happen chance upon a suitable vessel, however his vessel could not handle the sudden power and fell over dead in the middle of the road. Luckily the vessel had a wife who was pregnant with his unborn child, and he possessed that child and waited until the child could handle his powers: that child was Park Il-Pyo.

He is an extremely dangerous combatant judging by how he slaughtered many gods while angered and was the personal bodyguard of the Jade Emperor. He was stated to have fought with the Monkey King, and even Monkey King said that he was a good opponent. Jin Mo-Ri even stated that the Jade Emperor feared the Nine-Tails Guardian's abilities.

Possession: Nine-Tails Guardian can possess his contractor, as he used Park Il-Pyo's body to fight Okhwang.

Pyrokinesis: The Nine-Tails Guardian had ability to create and manipulate fire at will. 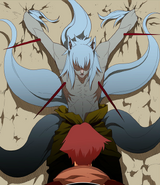 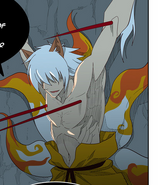