Na Hanseong had grey-colored hair and dark-colored thick eyebrows. He wore two blue-colored fingerless gloves with Ω on them and carries his sword around the hip. He wore an attire which consisted of a long coat, pants and long boots.

Cao-Yuan had a somewhat calm personality as compared to his team mates. He stopped Fei-Long from deviating off their mission of targeting participants, and after his team mates were defeated in the tournament went to help them when nano-healing was not of any use, although he later blew them up as soon as he noticed some suspicious activity amongst the Judges. He was also a firm believer of god and spoke his prayers every time he did something.

Cao-Yuan was paired with Fei-Long to kill the winners of the regional tournaments. After they took out the winners in the Chungcheongnam-do and Gangwon-do areas, they went and killed all winner members of the Jeju Island team, after which Cao-Yuan assumed the appearance of Na Hanseong in order to infiltrate the tournament.

For fighting in the nationals, 'Na Hanseong' was gifted with Bongsean that had been snatched by Oh Seongjin previously. On the day of the match between the Metropolitan team and Jeju Island team, he calmly faced Jin Mori after the opposing team leader escaped Fei-Long’s trap and returned to defeat his team mates despite being wounded. Yet even with an initial advantage through his weapon and Charyeok, 'Na Hanseong' soon found his abilities sorely lacking as the Jin Mori who he had looked down upon repeated the very moves used for defeating Fei-Long to defeat him too. 'Na Hanseong' was subsequently captured by Park Mujin and interrogated through the use of Judge P’s Marionette Charyeok, before Sang Mandeok showed up during Nox’s attack on the tournament to execute him.

Cao-Yuan had a physical level of 12, which increased to 16 during his match with Jin Mori. Since he impersonated the victor of Jeju Island regional tournament, he proved to be the strongest of his team, being able to fight Mori for a while, whereas his two team mates were defeated near instantly. He also wielded the National Treasure Bongseon before he died.

Aegis Shield: Na Hanseong's Charyeok was Aegis Shield which, as the name suggests, was a defensive shield. 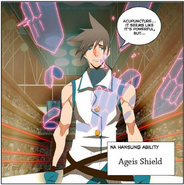 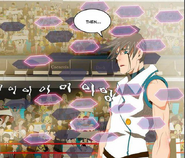 Weapon Enhancement
Add a photo to this gallery

Retrieved from "https://godofhighschool.fandom.com/wiki/Na_Hanseong?oldid=34330"
Community content is available under CC-BY-SA unless otherwise noted.