Na Bong-Chim is an old man. He has long hair tied back, a long beard and long eyebrows. He lost one of his arms against Jin Tae-Jin 17 years ago. He has needles sticking out of parts of his body.

Bong-Chim was shown to be a very calm and clear minded person, but still holds a grudge against Jin Tae-Jin for ripping his arm off, however he was still kind enough to train his grand-son.

Bong-Chim along with the other The Six, end up fighting with Jin Tae-Jin who they all lose to, and Tae-Jin rips Bong-Chim arm off. Bong-Chim later orders Park Mu-Bong to lock him up so he can learn to master his body and mind, so he can consume the Sage Pill without dying from its effect.

Bong-Chim managed to become part of The Six at the age of 40. He became fascinated about acupuncture after recovering from an illness western medicine couldn't cure.[1]

When he was a young man he tried to propose to Kim Oong-Nyuh, but she rejected him harshly.

A Round with God

After being locked up for many years, Bong-Chim grew tired and managed to make Jin Mo-Ri come to him and set him free. When Mo-Ri opened the gate and found Bong-Chim, Na Bong-Chim tells Jin that he'll destroy his enemies if he lets him go, while Jin looks around, looking for food. Jin eats the Sage's Pill, causing Na to freak out. Asking one more time for Jin to let him go, he tells him to use the computer which holds his locks. Although Na forgets the password and tells him Bak, the one who tied him up, would make the password impossible to guess, Jin uses his grandfather's name and unlocks the locks. When Na found out Mo-Ri is Tae-Jin's grandson, he attempts to stab him through his heart, only to narrowly miss when Jin barely counters with a kick. Realizing Jin has potential, Na lets him live.

Bong-Chim later meets up with his old teammate Park Mu-Bong who was looking for Mo-Ri since the latter's match is about to start. Bong-Chim then explains to Mu-Bong that Mo-Ri ate the Sage Pill and both of them end up having a match. Mu-Bong and Bong-Chim end up casting afterimages of each other during the fight and surprise each other how they both improved and remain the same. When their fight was over, they headed to the area to save Mo-Ri, but he ended up dying from Judge Q's attacks, but somehow was able to get up again. Bong-Chim and Mu-Bong end up talking about the upcoming threat and that they need to try to get The Six together again but couldn't.

Bong-Chim healed Mo-Ri body with needles and while looking at his body, he realize that Mo-Ri body, a Bong-Chim believes it is due to Jin being capable of holding more energy than the single pill was able to generate. An image of his thoughts showed Jin being compared to a normal man and holding the same amount of energy as a normal man with it taking up a much smaller area within his body.

He is assumed to be very strong, seeing he is one of the Six and is seen fighting very evenly with Bak Mu-Bong. Jin Mo-Ri was easily defeated by him, and was only spared when Bong-Chim saw his potential. Despite losing an arm he was still able to fight against Park Mu-Bong to a standstill.

After finishing his training to withstand the power of Sage Pill, Na-Bong Chim's power increase to the point that he can fight one on one with Jin Tae-Jin.

Superhuman Strength: Due to the nature of his fighting style, he has not explicitly shown bouts of superhuman strength but it is evident that he is monstrously strong - against Jin Mo-Ri, he would have pierced through his heart had Jin not pushed back the blow. He has demonstrated the strength in his fingers when sparring against Park Mu-Bong he was able to counter Longinus' Hand just using his finger.

Superhuman Speed: Bong-Chim has displayed extreme speed - he easily closed the distance between him and Jin Mori, and attack, with Jin Mori barely turning around in time.

As a member of the Six, Bong-Chim is a master of his fighting style. He is the highest level Needle Ryu practitioner and is assumed to know all its secrets. He operates an acupuncture clinic presumably as a result of his Needle skills. While Bong-Chim can use needleless Ryu, he seems to keep real needles to fight.

Acupuncture Needle is Bong-Chim's weapon of choice, which he uses in conjunction with his martial art. He was first shown using one when attempting to kill Jin Mo-Ri for being Jin Tae-Jin's grandson.

Full body with hair down 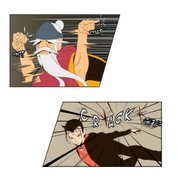 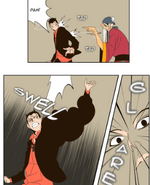