Moon Light Sword Style (월광검법, 月光劍法, 月光剣法, Wolgwang-geombeob), or Wolgwang Sword Style, is a type of sword-based martial art developed in modern South Korea. It is used by Yu Mi-Ra in the series. It emphasizes using skills and techniques according to the situation, using brute force when it is available or flexibility when called for.

Not much of the origins of the Moon Light Sword Style are known other than there have been twenty five sword masters including the current sword master Yu-Mi Ra and her father.

These are a list of the Moon Light Sword Style techniques that have been used in the series:

This is a style of Moon Light Sword Style that Judge P utilised when she was mimicking Yu Mi-Ri during the God of High School grand finals.[3] She also used Calm Blade (바백구, Babaeggu), Ingelken (잉겔켄, Ing-gelken) and Rotating Slash (니시푼각, Nisipungag) during the fight but their effects were not seen. 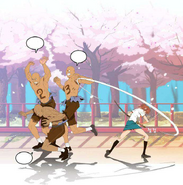 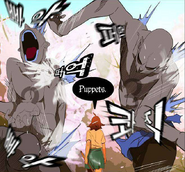 After effect of 35th Dance