It appears as an ancient giant Megalodon, which is an extremely large shark, nearly 15m long and very ferocious. It has 6 eyes, three on each side ranging from small to medium to large and x-mark scars all over its body.

Taek uses it to pierce his enemies with its teeth. Multiple teeth can be summoned at once as well as individually. He can also summon an entire shark head from the ground to consume his opponent from under them.

Teeth Generation: He can summon the teeth of his Charyeok individual and attack. It is easily capable of piercing a human body. When Jeon Jugok used a lightning bolt, he was able to block and shatter some of the teeth.

Teeth Shield: Taek can summon his Charyeok to shield him from attacks with its teeth. 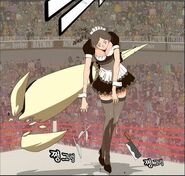 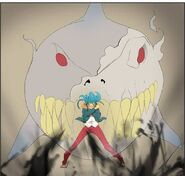