The God Of High School Wiki
Register
Don't have an account?
Sign In
Advertisement
in: Articles under construction, Characters, Female Characters,
and 4 more 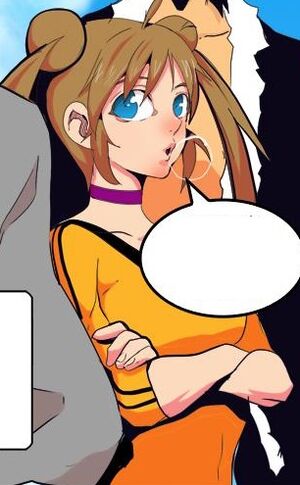 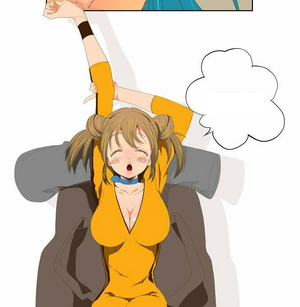 Bora is a tall, blue-eyed young woman with light-brown hair that is wrapped into two buns on the left and right sides of her head. Her lips are always pursed in a kissing fashion and her cheeks have a light blush on them. She wears a yellow jumpsuit, based off of the one Bruce Lee wore in the "Game of Death" film, which shows off her curvaceous figure and large bust.

Seventeen years after the events of RagnarÖk, her hair lengthened and she replace her blue choker with a purple one.

Bora has a very happy and immature personality demonstrated by her decision to go hunting during her team's match because she was bored. She has a tendency to go through a slideshow in her head about no matter how difficult things get for her she won't cry because she "has lots of friends". When Bora fights she is shown to be sadistic and violent, while still maintaining her carefree attitude, referring to the process of beating her opponents as making them cuter. During her confrontation with Han Daewi she develops a crush on him because of his strength and cool nature, going as far as to kiss him during the fight.

Bora shows that she cares a great deal about Daewi's well-being shown by how she demanded to find doctor for him when he was injured and told him she was worried that he died after he recovered.

Bora is a strong fighter and was able to defeat Jim Pumgwang and later even overpower Han Daewi. She is also strong enough to make a hole in the wall with a kick.

Superhuman Endurance: Bora has shown remarkable endurance and stamina. Several times she has received massive injuries from opponents only to continue fighting despite pain and fatigue.

Superhuman Agility: Due to the natural strengthening of her body from training she has superhuman agility. She is agile enough move any any position as he sees fit. She has shown the ability to effortlessly flip and jump around a fight using most surfaces to his advantage. She has enough flexibility to extend her leg up 180 degrees for her Northern ITF Front Kick.

Superhuman Strength: Bora has shown strength numerous times throughout the series during many fights. After the taboo was lifted on humans, she was strong enough to topple Nephilim single-handedly, through the strength of her kicks.

Superhuman Speed: Bora has shown remarkable speed. Initially she was capable of dodging Mira's strikes, even going as far as to comment on it before retorting with her own counter attacks. Her speed and skill were also enough to overwhelm Daewi when they fought the first time.

Ma Bora is in the possession of Tiny Dragon's Nunchucks, which is a National Treasure. When awakened it took the form of a long spear called Large Dragon Spear with dragon sign running along the handle of the spear.