Jin Mori
Hui Mori
Na Bongchim
Lee Hyangdan
Okhwang
666:Satan
Jung Mori
Limiter Removal: By hitting a pressure point in the brain, the user is able to remove the limiters that are placed on their body. To use this skill properly, the user needs to consume Sage Pill. This can be combined with Nabong Needle Ryu No Pain but at the cost of death, for human. After a certain of time, the effect of the technique will stop and the user will experience a tremendous amount of pain from using the technique, this is known as Rebound. The technique can be stacked, granting the user even more power at the cost of greater rebound pain. 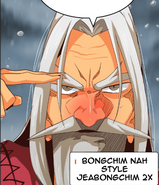 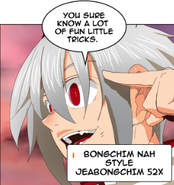 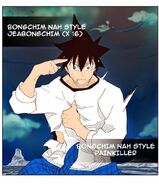 Limiter Removal with No Pain

Rebound
Add a photo to this gallery
Retrieved from "https://godofhighschool.fandom.com/wiki/Limiter_Removal?oldid=34073"
Community content is available under CC-BY-SA unless otherwise noted.