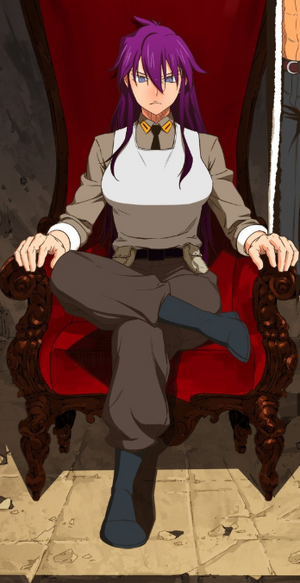 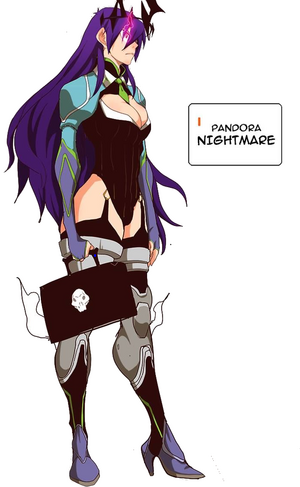 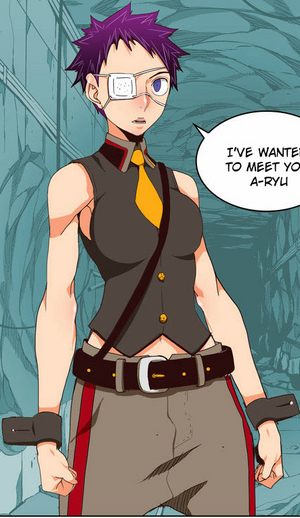 Lee Soo-Jin is a former antagonist turned supporting character in G.O.H, one of the two Keys, and a former Bishop of the Nox. An overall extremely dangerous fighter, due to her status as a Key, she can break the limiter placed on humans. 17 years after the RagnarÖk, she becomes the leader of Anti-Government Organization Balhae.

Lee Soo-Jin has an athletic figure with short purple hair and lavender eyes. Her outfit as a Bishop of Nox consisted of a midriff baring grey sleeveless dress shirt with a yellow tie, baggy grey cargo pants and black heeled boots. Her accessories were wristbands and an eye patch over her right eye. When her Charyeok was activated Soo-Jin's hair grew to thigh length, she gained a veil and a black and red box and her revealed right eye glowed while bleeding.

After leaving Nox, she wore a red hoodie, dark shorts and a large brown backpack. Her activated Charyeok now took on a more armored appearance featuring a black pinstriped cleavage-bearing bodysuit, slim-fitting lavender and cyan pieces covering her arms and shoulders, a small green tie with black collars and armoured stockings held up by garter-belt straps.

Seventeen years after the events of RagnarÖk, Soo-Jin has now grown her hair out (resembling the style that forms when she entered her Pandora form) and she wears nothing but a black strapless bra-like garment, grey cargo pants and black boots.

Soo-jin is normally a calm, steady authority figure, especially after she becomes one of the Six. However, she can also be a bit childish, shown by how quickly she nearly buckles to Il-Pyo's offer of unlimited Mcdonald combos in exchange for her amity[1]. She also has a sweet tooth.

During battle, she is focused and ruthless, willing to defect from Nox just to achieve her goal of defeating and possibly killing Jin Mo-Ri. She has a hate for South Korea because of events that occurred in childhood.

Soo-Jin is the granddaughter of the infiltrator that was captured by the government. While her grandfather was in captive, her mother and her grandmother were sent to the mines to work, there her mother got pregnant with her and gave birth to her.There, Soo-Jin developed a deep grudge for South Korea for the suffering she and her mother had to go through.

In the mines, while Soo-Jin was five years old, she's shown to have been favored by most of the older miners and was given food by them, even if it meant risking their lives.

One time when Soo-Jin sneaked into the mines that her mother and friends were digging in to give her mother a snack, the walls cracked and caved them in. Luckily, the airline still worked and the workers all agreed to take turns breathing in. Hours later, Soo-Jin was sleeping and her mother noticed that the other workers were advancing on them. Then Soo-Jin's mother demanded what they were doing, and their friends replied that they talked and let the mother-daughter duo to breathe through the airline, claiming that they had lived their life and that she should save her child. Hours later, the miners including Soo-Jin's mother died of lack of oxygen and helping Soo-Jin escape.[2]

After being rescued by Bong-Sa and The RE Taekwondo Force, who later planned to kill her, much to Bong-Sa's displease. Bong-Sa refusing to allow them. When approached by his superior officer, Ryu, Bong-Sa summons his Borrowed Power, Sapsal Dog, to take Soo-Jin away while he fights his officer. [3]

She later wakes up in front of a military post, where she was indoctrinated and spent years learning her grandfathers ITF. Til the age of 16, she slaughtered her fellow officers, claiming to have taken up the task to infiltrate South Korea. Where she later joined the Nox.

Soo-Jin is seen with Gang Man-Suk, watching the construction of the Nox World Tournament Colosseum, commenting on how she senses Jin Tae-Jin in there.

Soo-Jin is seen again saving Judge O, with Gang Man-Suk tagging along. Ho-Sik instantly recognizes Soo-Jin as a traitor and they begin a short one-sided battle ending with Soo-Jin putting Ho-Sik in an illusion. Before anything else can happen, Xiao Chen arrives. After being overpowered, fearing further conflict with the dangerous Xiao Chen, Soo-Jin and Gang Man-Suk retreat.

She is seen once more, saving Jin Tae-Jin with Gang Man-Suk and Ma Bo-Ra accompanying her. While defeating a couple guards, Jin Tae-Jin comments on how he's glad she survived. When he asked if Jin Mo-Ri won the battle between them, she outright lies that she won, angering Jin Tae Jin who honestly believes she won.[4]

Lee Soo-Jin reappears again, piercing from above, The King's Big Bang attack before it's fully in effect. Finishing it with a combination of Northern ITF Taekwondo and Baek Seung-Chul and Uma, using Pacho II.

The King resisted the attacks by summoning his Robe of the Sage, but Soo-Jin uses the opportunity to take his Cane of the Sage and hand it to Kim Oong-Nyuh, telling her to bring Jin Mo-Ri out of Sage Realm.

Attempting to use his fundamental force manipulation, The King's efforts is negated by Lee Soo-Jin's, The Hope:Sovereignty, Pandora skill.

The King, not being able to use his godly powers because of Soo-Jin, resorted to using his copied Martial Arts, using Northern ITF Taekwondo to counterattack. Lee Soo-Jin proclaimed them as only improvised attacks, prompting the king to use Mo-Ri Hui's original Kicking Imoogi. [5]

Lee Soo-Jin is a very powerful and dangerous fighter shown to have beaten The Six leader and most powerful fighter Kim Oong-Nyuh.  She is the master of Gang Man-Suk who taught him Northern ITF Taekwondo.

Superhuman Endurance: Lee Soo-Jin has shown remarkable endurance and stamina. Several times she has received massive injuries from opponents only to continue fighting despite pain and fatigue.

Superhuman Agility: Due to the natural strengthening of her body from training she has superhuman agility. She is agile enough move any position as he sees fit. She has shown the ability to effortlessly flip and jump around a fight using most surfaces to her advantage.

Superhuman Strength: Lee Soo-Jin has shown strength numerous times throughout the series during many fights. Even without charyeok, her kick blown apart Sage Realm, in her fight against Jin Mo-Ri.

Superhuman Speed: Lee Soo-Jin has shown remarkable speed. Several times she has closed the distance from opponents and appear near them in an instant.

Pandora: This is the charyeok of Lee Soo-Jin, this is the second key introduced in the series. Like the other key it changes the appearance of the user. Her charyeok is Pandora from the Greek myth, the woman who opened the Pandora's box and let loose all the evil and suffering in the world. She can create diseases and illness wherever she goes and she seems to have the power to produce poison from her body.

Ability Sealing: Being one of the keys, Pandora has the ability to seal away powers. When used on a god, this seal can also carry them down to a lower plane.

Ability Awakening: Being one of the keys it has the ability to lift the seal on a person enabling them to attack gods, angels, and nephilim. It can also undo the seals it placed on gods. It can bring out a person's true power.

Physical Enhancement: It greatly enhances all of its user's physical attacks, speed, and power.

Toxigenesis: It gives her the ability to generate and create various poisons ranging from acids to knock out gasses. These poisons can be released on contact and their effects can vary from simply corroding to causing the body to dissipate entirely.

Pathogenesis: It gives her the ability to generate and manipulate various diseases and symptoms ranging from fever, blindness, paralysis, etc. She can manifest these diseases by simply looking at her target.

Armor: Through the use of Pandora's box Soo-jin can invoke an armor onto herself. This armor can even further increase her physical abilities, especially attack power and durability.

Telekinesis: Pandora gives Lee Soo-Jin the power of telekinesis. She demonstrated this when she levitated the hundreds of Sky Whales across the Sage Realm. She has also levitated herself.

Retrieved from "https://godofhighschool.fandom.com/wiki/Lee_Soo-Jin?oldid=27690"
Community content is available under CC-BY-SA unless otherwise noted.