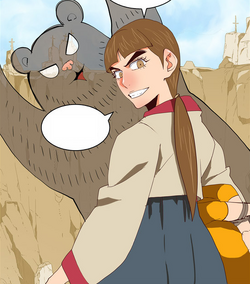 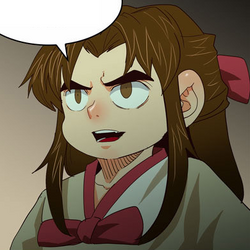 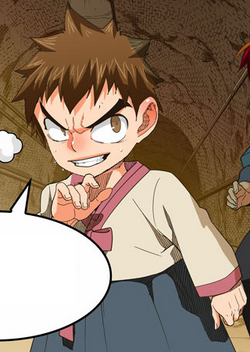 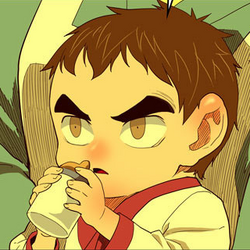 Eve[1]
Whore of the Gods

Trinity: The Gods of the Wind, the Rain, and the Clouds[2]

Chairman of The Six

Kim Oong-Nyuh is a member and founder of The Six.

Oong-Nyuh is a slim woman, with an average build. She seems to be older than she looks, as her powers revert her to a child form and that she knew many people in the past based on how she knew about the Monkey King and Sang Man-Duk. She has dark brown hair tied in a long ponytail with a red flower pin. She wears traditional Korean clothing consisting of hanbok and white-pink slippers.

She has a very strict personality and will use force to stop people from fighting amongst themselves. She doesn't care who a person is even to the point of harming Jin Mo-Ri, a god, when he asked her who she is.

She is a member of The Six and is very skilled in combat. She was able to capture Ma Bo-Ra easily after she was awakened and even able to hit an exhausted Mo-Ri without him even seeing her punches. Even when her body regressed to that of a child, she can hold off several dantes and even intimidate them.

Superhuman Strength: She possess considerable strength, even in her child body. In her adult body, she easily dominated the third dante who possess multiple souls of his brothers.

Superhuman Speed: although not shown as clear as other characters, it can be seen when she protected Mo-Ri Hui in her child body. She fend of multiple dantes while also protecting the clone of Monkey King. In her adult body, her speed is great enough to contend with The King.

Superhuman Endurance: Both in her adult and child body, she is shown to be quite resilient. For example, She endured the pain of being hit with Sang Man-Duk's charyeok and still able to open a portal to sage realm. In her adult body, she endured getting hit multiple times by The King who uses Fundamental Force Manipulation to enhance his prowress and still getting up.

Knowledge of Rituals: Ungyeo can use several rituals which she can use for various effects, such as a ritual where she only eats garlic and mugwort and chant for 100 days to strengthen her power in situations where she use too much of her original way of borrowing power.

Trinity: The Gods of the Wind, the Rain, and the Clouds: These are the gods that Eve made contracts with. The power of her charyeok allows her to manipulate weather-related phenomenon. So far Kim Oong-Nyuh has used manipulation of electricity to a certain extent and manipulation of the cloud, exhibited when she uses cloud to temporarily trap The King and disabling The King's electromagnetic manipulation.

The Original Way Of Borrowing Power: As one of the few today who has access to it, Her charyeok can be used alternatively thanks the godly power within her body. The cost of the power is age regression, meaning she become younger the more she use her power. if she becomes too young (i.e. a baby) then she is unable to use her powers. Some of the ability that requires the use of this type of borrowing powers are:

The 'complete' version of her charyeok looks very much like her appearance in the ancient past.

She temporary owned and use The King's national treasure. It allows her to create dimensional portal with less power usage than when she did it herself. when she used it a sigils-covered circle appear on the floor and the cane 'branch out', creating a circular portal.

Ungnyeo eons in the past 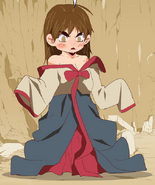 Backlash after using her powers

The complete version of her Charyeok, "Trinity"
Add a photo to this gallery

Retrieved from "https://godofhighschool.fandom.com/wiki/Kim_Oong-Nyuh?oldid=26046"
Community content is available under CC-BY-SA unless otherwise noted.