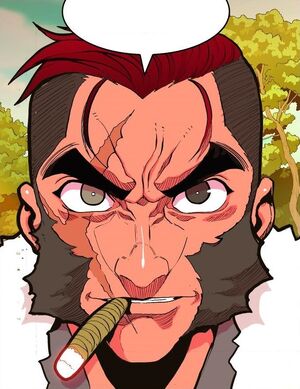 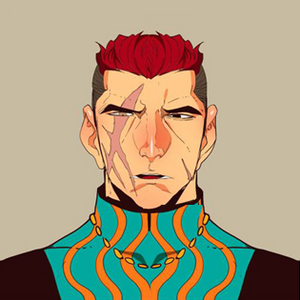 Episode 6
Kim Dooshik (김두식, Gim Dusig; "Dooshik Kim") was a member of The Six. He was previously working with Sang Mandeok, but later sided with Park Mubong who offered him a better deal than Mandeok. Before the series began, he beat Moon Giju's master, Seong Gisa, to become a member of The Six. He becomes one of the seven richest man on the world after RagnarÖk by doing some shady deals with World Government (Park Mujin's government) while retaining his status as member of The Six, until he is defeated by Judge Q.

Dooshik is a tall and large man, standing at 201cm (6,6 feet). He sports red hair at the top that is slicked back, while having a brown buzz cut on the sides of his head. He seems to have a lot of money, displayed with the amount of jewellery and expensive clothes he wears. He has has a large scar on the right side of his face going from his cheek to his eye, the same eye having a pale brown iris.

Seventeen years after the events of RagnarÖk, Dusik appears largely the same as before except he has grown thick chops (á la Jin Taejin) and he wears newer more extravagant looking attire. He appears to have put on a little weight around his torso, though this may be just the clothes he wears, as he shown to still have muscular core when wearing only his undershirt.

Dooshik acts like a typical big-shot gangster who likes to show-off his wealth and strength. He seems to prefer street fighting and physical battles, mocking Charyeok abilities. This is first shown when Mu-Bong uses his powers to try and suppress him, but Dusik responds if it was merely petty tricks and that he should fight like a man with his fists. Due his reliance on his own strength and his overall brutality as a fighter Dusik is highly confident in his own abilities and is not afraid to fight anyone, even a God.

Despite his arrogance, Kim Dusik knew when someone outclassed him in skill, shown when he was in awe at the sight of Odin fighting Jin Taejin and Na Bongchim, as he almost cannot believe that despite being part of The Six, his skill pale in comparison to the old men.

He has been shown to have no loyalty to the Six, and doesn't get along many of his fellow members. He is even willing to betray them to serve his own interests, going as far as to turn his back on Moon Giju's request, and work with Sang Mandeok to mess around with Park Mubong and his Judges. Despite his dislike of The Six, he still was willing to collaborate with Mubong as long as he profited from it. In addition, he has shown that he is willing to make deals with almost anyone, even a child, as long as they give him some form of collateral to compensate him.

Prior to RagnarÖk, Dusik's only motivation in life is money and he will do anything to get it even if it means betraying others. His greed is fueled by his past experience, where he saw that the men he beat up got away easy despite provoking him first because their parents are rich. This caused him to be come obsessed with becoming so wealthy that no one would be able to look down on him again. However, after the war Dusik decided that he will use his wealth to build a "Tower of Despair", as a symbol of his legacy.

After being defeated by Zeus during RagnarÖk, Dusik kept having nightmares about it for a week. Due to his unwillingness to accept that he was scared of Zeus, he vowed to sleep until he could beat him in his dreams. 17 years after RagnarÖk, Dusik went into a berserk-like state and completely decimated opponents who used a charyeok that reminded him of Zeus.

He is very powerful since he hospitalized a member of The Six to take his position. It was commented that he has a powerful right fist that he often keeps in his pocket. When he was ready to punch Giju with his right fist, his thugs commented that he was done for, and even Giju himself was alarmed by this fact. Following the events of RagnarÖk, he states that it now takes him a while to really get into the fight against most guys and Q states that Dusik's lack of training is what led to his victory. In the past, Changju Moon stated that Dusik would be unstoppable if he trained and polished his skills more. Due to his obsession with money, whenever Dusik fights someone and money is at stake he seems to get more powerful, as shown in his fight with the Generation X team. It has been stated that he has excellent dynamic vision, at least in his good eye, which was measured to be 10 DVA.

Shockwave Yell: Just him screaming in excitement shattered all the windows nearby and caused Mubong's ear to bleed. His laugh is also powerful enough to shake the surrounding area and make people cover their ears when near him.

Superhuman Strength: With a single punch, he effortlessly defeated multiple Priests while launching them through multiple walls, despite using his left hand which is stated to be weaker then his right. Giju, a person who has strong enough defensive capabilities to tank damage from an extremely powerful Bishop, was frightened as soon as Dusik pulled out his right hand. He was able to punch the god Zeus 206 km all the way to Jeollabuk-Do Iksan destroying what seemed like a city and a mountain on the way.[1] Dusik can throw pebbles with enough force to knock someone out from far away, causing someone to believe they are being attacked by a laser type weapon. According to Gut-Geon, Dusik has a 4.5 ton grip, an 85 ton squat, and an instantaneous maximum power of 240,000 horsepower.

Superhuman Speed: Was ambushed by multiple Priests but effortlessly counterattacked and defeated them with his own attack. Said Priests were completely helpless as he knocked them out with just one blow each. He also ran from China all the way to Seoul, South Korea in a matter of minutes.[1]

Superhuman Durability & Endurance: Fitting his fighting style, Dusik has monstrous levels of durability and endurance. Despite being overwhelmed by the god Zeus, Dusik was still able to quickly recover from a punch that sent him flying all the way to China as well as sprint the distance back to South Korea without showing much fatigue.[1] When he got stabbed by a gang member the knife bent backwards. After the time-skip, it was stated that he stays in top form simply because of how strong his endurance his. He is also shown to be to survive multiple massive explosions at point blank range with very little damage.

Extreme Sleep Mode: Dusik used this make himself sleep for 1,456 days in order to defeat Zeus in his dreams. This seemed to him in an almost meditative training state that he claimed allowed him to have 5:5 fight record with Zeus in his dreams.

Monster Dusik: A special feature unique to Dusik, that occurs when his HP falls below 10%. His attack power and defense reach their maximum levels, allowing him to defeat a member of The Six he previously struggled against. When this ability activates he will usually light up a cigarette and smoke before attacking his opponent.

Superhuman Solid-Body : In Chapter 211, some random figurines was try to kill Dusik with a sniper. However, he was calculating the distancing wrongly, resulting in the gun to crash onto Dusik's body. Surprisingly, rather than Dusik was hurted after the gun-crash, the gun was crooked because it crashed onto Dusik's body, showing how solid Dusik's body really is.

Dusik Kim's fighting style has been described as bar fight where he does whatever it takes to win. This style primarily focuses on punches, palm strikes, and even headbutts. In addition, Dusik doesn't follow traditional methods of fighting by tanking most attacks thrown at him instead of dodging or attacking multiple opponents at a time instead of trying to fight one-on-one.

All pimped up after RagnarÖk 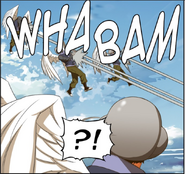 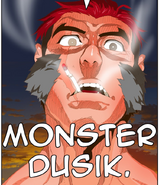