The God Of High School Wiki
Register
Don't have an account?
Sign In
Advertisement
in: Articles under construction, Characters, Judges
English

The Judges, also known as Commissioners or Executives (Kor: 집행위원), are a group of powerful humans under the orders of Park Mu-Bong. The Judges themselves are very powerful, most having superhuman abilities and the ability to use Charyeok. Post-RagnarÖk, the number of judges have increased greatly due to how the new G.O.H. Tournament operates. The strongest or most useful of the Judges have a code name designated by a letter of the Roman alphabet. The weaker judges are given numbers as codenames. Since the highest-numbered Judge has been 205 it can be assumed that there are at least that many of them.

Judges appear to be recruited through the G.O.H. Tournament. Exceptionally talented or powerful participants may be recruited to become judges, just as Park Mu-Bong has Judge P due to Samuel Rosinante. If a G.O.H. Participant makes it to the quarterfinals of the tournament they are given a Judge License, and if they win the tournament they are given the opportunity to become World President. All Judges are appointed and managed by Park Mu-Bong, who has power their pay, missions, and responsibilities. The known Judges have been responsible for recruiting contestants for the God of Highschool Tournament. Judges will participate in combat or reconnaissance missions if ordered to do so. After RagnarÖk all Judges receive the rights of national heroes and are given nano-injections which they can also distribute to their direct family members.

The Judges were ordered by Park Mu-Bong to find strong people to enter the God Of High School Tournament for unknown reasons, and when they were done with that, they set back to watch the whole tournament to find the "key". When Mo-Ri got between the fight of Gang Man-Suk and Go Gam-Do, all the other Judges went in to stop him. P somehow arm locked Mo-Ri without using her hands and they took him to a room while they had a meeting to whether or not to remove him.

While chatting, when Mo-Ri's power level went up, some of them started to think that he could be the "key" they are looking for. 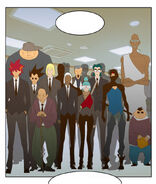 Other Judges from different sectors