The God Of High School Wiki
Register
Don't have an account?
Sign In
Advertisement
in: Articles under construction, Characters, Female Characters,
and 4 more

Takahashi Chiaki (Japanese game)
Tano Asami (Japanese anime)
Lee Mina (Korean anime)
Cristina Vee (English anime)
Judge P is a member of the judges. She is the first female Judge to be introduced in the series. She is initially shown to be Park Mubong's secretary.

She is a tall, slim woman, wearing a female version of the Judge's uniform. It is all black with matching skirt and heels but has an open white high collar. Her hair is blue that is tied up into a bun, while having long bangs thats swept to one side.

Judge P is a seemingly calm and dutiful woman, focusing on her tasks and keeping a serious air about her. She is also quite caring and respectful to the rest of her peers. She felt sorry that Judge Q had to be lied to about the death of Judge T's family. But she does seem to have a temper as she got very annoyed at Jin Mo-Ri for defeating Gang Man Suk in one hit (since lost a bet to Judge S).

Being Mu-Bong's secretary, she is seen almost always by his side, prepared to do what he asks without asking any questions.

At a young teenage age, P was found and accompanied Park Mubong after he had raided and destroyed a Nox hideout. Helping him in his goals.

As the preliminaries round of the God Of High School Tournament was about to end, Moon Gi-Joo told all the Judges that is about to be over, but then Judge P told Gi-Joo there is still one more called Gang Man-Suk and he out of them all, he show more talent. When the round between Man-Suk and Go Gam-Do were about to begin, P mention that the tae kon do Man-Suk is using is a different form which is used for war not sport which is known as Northern ITF Taekwondo.

P then go on about Man-Suk past and how he killed three hundred student for revenge, even calling him a monster. When Mo-Ri got between the fight of Gang Man-Suk and Go Gam-Do, all the other Judges went in to stop him. P somehow arm lock Mo-Ri without using her hands and was upset that Mo-Ri for ruining the fight, but in reality she was upset for losing her money which she bet Man-Suk to win.

She is pregnant with Park Mubong child.

Judge P's combat abilities are yet to be known but she has a GP of 100 and can use charyeok.

Marionette: It is not shown how powerful she is when in battle, but she uses her Charyeok to create 'dolls' of Shim Bong-Sa's family to trick Drake McDonald into 'killing' them and lead the Judges to the organization which attacked Jin Tae-Jin. 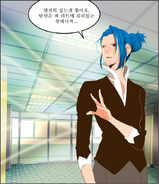 Using her strings to hold Han-Sung down. 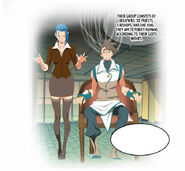