Joker is the Charyeok of Judge Q. He summons it by using his cards.

Joker has a very colorful clown-like appearance and has crosses for eyes. It is always seen smiling with sharp teeth.

As a Charyeok, Joker provides Judge Q with a high level of inhuman abilities. Judge Q can materialize the Joker from his cards, once he removes his limiter. The Joker is very strong and stopped Drake McDonald's sword with bare hands.

Cards: The Joker lets its contractor use cards to fight and can pierce metal and walls effectively. The cards can be moved telekinetically, either to defend or attack.

Scythe: After Joker materializes, the cards join together to form a scythe. This scythe has a very high cutting ability and can cut off large buildings. It is made out of the same cards the Joker is made out of. 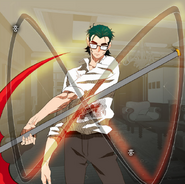 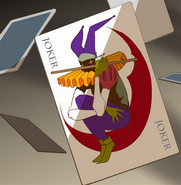 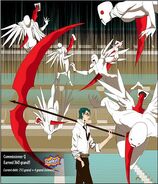 Small scythes
Add a photo to this gallery

Retrieved from "https://godofhighschool.fandom.com/wiki/Joker?oldid=29739"
Community content is available under CC-BY-SA unless otherwise noted.