Masahiro Yamanaka
Jeon Jugok was the Junrabukdo representative and was the winner of the same region in the G.O.H Tournament. He was the grandson of the Jeon Jaesan Chairman of the The Sixsung Corporation.

Jugok had green colored hair and brown eyes while his attire was a white zipped up jacket and red pants. After his match with Taek, he was last seen wearing a loose fitting white and pants.

Jugok was a very prideful polite to his grandfather and respected him a lot. He also had a rivalry with Park Ilpyo and considered himself better than him. He was very proud of his skills and didn't like when his opponents acted disrespectfully such as when he told Taek to take his hands out of his pocket while fighting.

After his fight with Jegal Taek, Jugok was too embarrassed to want to meet his grandfather due to his inability to use his Charyeok. This along with wanting to proclaiming himself stronger than Il-Pyo and wanting to proof it were clear indicators of his prideful nature towards his opponents. Jugok was able to recognize the monster he'd become along with Hyang-Dan after he'd attempted to absorb her for more power.

Jeon Jugok entered the G.O.H Tournament as part of the Junrabukdo team, telling his grandfather he would make him proud during the tournament. Jugok was defeated by Taek during the first match and with Lee Hyang-Dan being disqualified for interfering and Heo Ilseon withdrawing, his team ended up losing the tournament. Jugok was transported to the healing room where the staff were unable to stop his severe bleeding until Bongchim halted the bleeding at the request of his Jugok's grandfather.

While hospitalized, Jugok was offered the power of Greed by Manduk and confronted Jegak for a rematch.

Jugok was a highly skilled fighter with the ability to use Charyeok. He was once defeated by Park Ilpyo in the past. He had the second highest GP after Mori of all the participants of the G.O.H Tournament. He was skilled in wizardry and according to his grandfather, he had been very skilled even as a child. Despite his skill in wizardry, Jugok still practiced in martial arts at the behest of his grandfather to make up for his weakness though how skilled he was is unknown.

Mage: Jugok's charyeok was a mage. Its appearance was that of an old mage wearing a hat and holding a staff in its hands. This provided him the ability to use magic spells like creating fire circles and lightning bolts to attack the opponent. However after his defeat by Jegal Taek he lost the ability to summon it.

Greed: Sang Mandeok granted him this charyeok allowing Jun Ju-Gok to regain his magical abilities in addition to Greed's absorbing power. Through Greed's absorption ability, Jeon was able to spit out anything he absorbed. 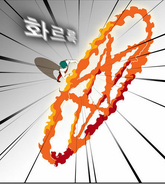 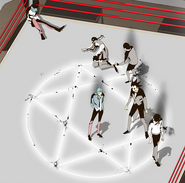 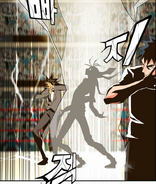 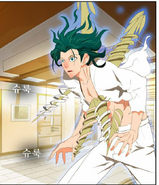 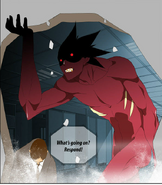 Jugok after fusing with Greed
Add a photo to this gallery

Retrieved from "https://godofhighschool.fandom.com/wiki/Jeon_Jugok?oldid=31919"
Community content is available under CC-BY-SA unless otherwise noted.