Takaya Hashi
Jeon Jae-San was a member of The Six and the chairman of the Six Sung Corporation. He was also considered a living National Treasure.

Jae-San is a huge man, with his physique easily exceeding that of a normal human being. His hands are large enough to break a table with a slight push of his hand. He has an elderly appearance with white hair and wears glasses.

Jae-San is proud of his grandson, Jun Ju-Gok and cares for him. He also has a size complex and doesn't like it when people comment on it. He believes that people need to be born with strength and cannot become strong with sheer hard work. When Ju-Gok lost to Il-Pyo, he asked Il-Pyo to become his student without any regard for his own grandson. In spite of all of that, he is shown to be proud of his grandson.

Jeon Jae-San is fist seen sitting on at a table in a meeting of the Six Sung, where he receives a message of the Six being. He is then seen encouraging his grandson Jun Ju-Gok, who is participating in the God of High School Tournament.

Jae-San later arrives to the stadium of the GOH Tournament, to watch his grandsons match against Jegal Taek, alongside a fellow member of the Six and the organizer of the tournament, Park Mu-Bong. He is then enraged by Taek humiliating his grandson.

Later Jeon Jae-San is seen mourning his grandson, who was taken over by Greed and killed by Jegal Taek. He tells Park Mu-Bong, that he has lost the Six Sung Company, due to the stockholders siding with the JG Group, which is owned by Jegal Taek's family. He then demands to be able to see Taek, but Mu-Bong denies this. Jae-San then attempts to attack Mu-Bong, but is stopped by Seo Han-Ryang, another member of the Six. Jae-San then questions Mu-Bong, why he is even continuing with the tournament, now that he has found the Key, Park Il-Pyo, to which Mu-Bong responds that they need more strong fighters to fight against their enemies.Mu-Bong then promises, persuaded by Han-Ryang, that he will give Jegal Taek to Jeon Jae-San after the tournament ends.

He later appears at the stadium, helping Mu-Bong and the Judges, in the fight against the Bishop Sang Man-Duk. Jae-San teleports all residents of Seoul outside off the city borders, and uses the missiles launched by the U.S.A. to make a giant bomb which he launches with a giant meteor, and also trap inside a barrier surrounding him and Man-Duk, to kill both of them. This fails, because Jae-San needs to disable the barrier, to protect the people fighting below the stadium. Because of the explosion Sang Man-Duk is greatly weakened and Jae-San is killed by it. Before he's death Jae-San sees Jegal Taek absorb the Key and later being defeated by the Monkey King Jin Mo-Ri. His last thoughts are about his grandson and how proud he is of him.

Alchemy: This allows him to create/convert objects from pre-existing materials such as he turned 567 nuclear missiles into a massive nuclear missile. It also imbues the object with magical power.

The Great Magician: It appearance has not been seen but it was said that it is the strongest magic using charyeok in the world.

Anti-Teleport: As the name suggest this prevents teleportation abilities to work locking the opponent in the confined space.

Teleport: As the name suggest this allows for teleportation from one place to another. He is so great with this he can teleport an entire province of people miles away.

Protector: As the name suggest it is a shield that is so strong it is even able to block the Charyeok of Sang Man-Duk.

Meteor: As the name suggest this allows him to summon a massive meteor from space accompanied by smaller meteors. when this is combined with alchemy it was powerful enough to severely damage a nephilim summoned by King of the Earth, a feat considering at the time his taboo hasn't been lifted. 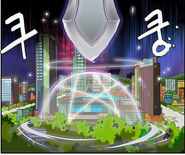 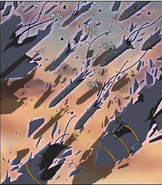 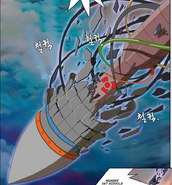 Reconstructing as a massive alchemic missile

Meteor
Add a photo to this gallery
Retrieved from "https://godofhighschool.fandom.com/wiki/Jeon_Jaesan?oldid=31477"
Community content is available under CC-BY-SA unless otherwise noted.