Jang Jang-Mi is a Choongcheongbukdo representative in the G.O.H Tournament. She was the runner up in her regional tournament.

Jang-Mi has red coloured hair as well as her eyes and wears glasses. She is usually seen carrying a bag which contains her sword.

Jang-Mi has a crush on Pum-Gwang and starts blushing when he praises her clothes, sometimes misunderstanding what he says.

Before Pum-Gwang saved her from her best friend's attack, Jang-Mi had a somewhat rude and isolated personality.

Jang-Mi was a talented student in both studies and kendo. She used to bring food for her father, who worked as a labourer and met Pum-Gwang there. On her father's request, she helped him a bit with studies and left. She later met him while going for her kendo competition. On the way, she was attacked by her best friend, but was saved by Pum-Gwang. Later, she ended up being runners-up in the comptetition while Pum-Gwang was falsely accused of a crime, forcing him to leave the exam. Later on, Jang-Mi taught him again for a year leading him to pass the exam.

Jang-Mi's level is 8 and her GP is 29. She also carries a bamboo sword and used to practice kendo. While fighting, she uses a bamboo sword and a small wooden blade to fight and seems very fluent at using it. She lost to Yu Mi-Ra when she dodged the attack and knocked her down.

Above Average Endurance: Jang-Mi has shown remarkable endurance and stamina. Several times she has received massive injuries from opponents only to continue fighting despite pain and fatigue.

Superhuman Agility: Due to the natural strengthening of her body from training with her father she has superhuman agility. She is agile enough move any any position as he sees fit. She has shown the ability to effortlessly flip and jump around a fight using most surfaces to his advantage.

Superhuman Strength: Jang-Mi has shown strength numerous times throughout the series during many fights. Jang-Mi has blown apart arenas.

Superhuman Speed: Jang-Mi has shown remarkable speed. Several times she has closed the distance from opponents and appear near them in an instant.

Expert Swordsman: Being a daily practitioner in Kendo, she has shown great mastery being able to wield her sword with any hand, cutting through steel and concrete even with a wooden sword.

Bastard: This is Jang Jang-Mi's Charyeok. During her battle against Mi-Ra when her sword is broken in half, she summons a huge sword in her hands using her charyeok. Her GP dropped from 29 to 15 when she used her Charyeok.

Weapon Augmentation: This is a Weapon reinforcement type Charyeok, which strengthens her sword in both power and size.

Cutting Ability: It has shown to have incredible cutting ability as it was able to cut through the fighting ring. 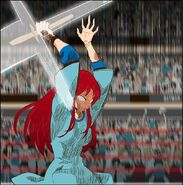 Charging Bastard
Add a photo to this gallery
Retrieved from "https://godofhighschool.fandom.com/wiki/Jang_Jang-Mi?oldid=24212"
Community content is available under CC-BY-SA unless otherwise noted.