Chapter 58
Jack the Ripper is the Charyeok of Gwum Gi. Through unknown means Jack the Ripper was absorbed by Greed, but Gwum Gi somehow regained the ability after Jegal Taek's death.

It looks like a middle aged man with a long black mustache and goatee, wearing a hat and long coat.

Jack the Ripper has shown to have a calm and composed personality, in contrast to Gwum Gi's wild one. He says that he is willing to lend Gi power and teach him how to use it properly. However, he does get easily annoyed by Gi's antics.

It has shown to be quite powerful. 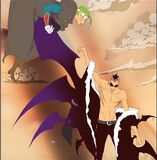