The God Of High School Wiki
Register
Don't have an account?
Sign In
Advertisement
in: Martial Arts techniques 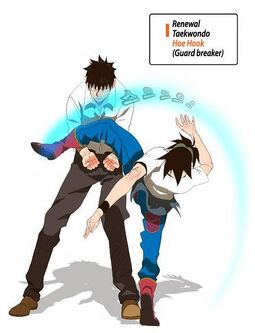 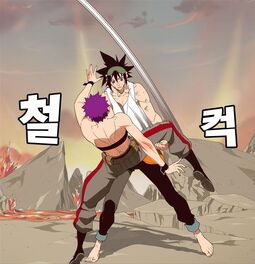 Jin Mori
Hui Mori
Gang Daehyeop
Hoe Grab is a kick used to grab an opponent in a lock position. The fighter faints a reverse kick with one leg and uses that leg to hold the arm of the opponent. It is mainly used to break an enemy's guard.

In Renewal Taekwondo it can be used with variety of combinations with other skills including Spinning Top Kick and 3rd Stance Hwechook. There is at least two variation of this technique. One is by using the opponent's arm as leverage to deliver a knee to the opponent's head with the other leg. The other is performed by hooking one's leg onto an opponent's armpit to flip the person.

Northern ITF Taekwondo use this technique with right flamingo stance and use it to create an opportunity to use Right Flamingo: Three-Pronged Strike, a Northern Korean equivalent of 3rd Stance Hwechook. 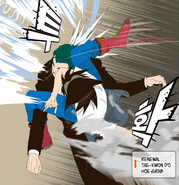