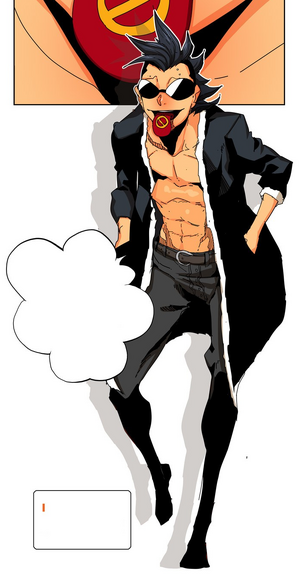 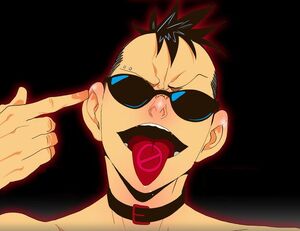 Gwum Gi (궘기, Gwom Gi; "Gi Gwum") is a participant in the G.O.H. tournament who was included in the nationals because the winner of his region's tournament was killed. 17 years after the RagnarÖk, he has become a member of anti-government organization Balhae.

Gi has short, black, spiked hair that is set in a thin Mohawk with the sides shaved. He has multiple piercings in his right eyebrow and wears sunglasses. He has a tattoo on his tongue as well, and wears a coat with the non-smoking symbol on it with nothing underneath it. He wears a collar around his neck. He is usually sticking his tongue out.

Seventeen years after the events of RagnarÖk, his overall appearance remains the same but his hair has grown and his Mohawk has widened.

Gwum Gi has a somewhat rebellious and chaotic personality. He would not accept anything other people make up for him, including his name (which was originally Kim Deokil), his homeland (which he claims to be Iceland) and so on. He collects his enemy's earwax every time he defeats them, repeatedly saying that if it was the ancient times, he would have taken their noses. Gwum Gi also has an obsession with deviations of norm, particularly "Revolutions".

Gwum Gi is first seen in a cameo of the new fighters, he then reappears to fight against Park Ilpyo but is defeated quite easily by him.

During the Nationals, his team went against Park Ilpyo's team. As his teammates lose, he steps onto the arena and is audibly disgruntled and remarks that the other team sees them as training dummies. His first opponent was Park Seungah, but with a quick chop to the nape of her neck, she falls down and loses the match.

As Ilpyo steps onto the arena, he releases a pressurizing aura that has more than half the entire stadium clutching themselves and trying to remain upright. Gwum Gi is not affected. After a rather quick scuffle, Gwum Gi ultimately loses to Park Ilpyo when the other decimates his Charyeok, Jack the Ripper.

Gwum Gi is one of the teenage fighters called back and is seen conducting good behaviour around others despite his initial personality, most likely developed from when he was working at his father's market. He apologizes to an irate Gang Manseok and walks away when Manseok grabs him and essentially starts harassing him. Manseok stops and meekly apologizes when Jin Mori and his team arrives on the scene.

When their formation is disrupted due to Lee Sujin's appearance, Gwum Gi, along with Ma Bora and Gang Manseok are transported in the Sage Realm near a training ground for Monkey Soldiers.

Gwum Gi is shown to butt heads with Gang Manseok as the two both want the position as leader. As the two argue, Ma Bora points them to the training grounds.

There, all three of them start disrupting forms, throw around casual insults, and essentially cause havoc. When one of the three young monkeys make a comment about the usage of Heavenly Arts, or in their case Charyeok, Gwum Gi turns red and attacks them with his.

They are seen again helping Han Daewi, Yu Mira, and the others when they reach them. When the two wake up, Gwum Gi is shown to be making strategic plans along with the others.

When they carry out their mission, Gwum Gi, Manseok, and Bora head straight to the main lines as distraction. They then turn to flee until they are intercepted by Priests.

As Gwum Gi battles, he remembers Judge B telling him that he is holding himself back by acting selfish. Eventually, Gwum Gi listens to Jack the Ripper, and manages to turn the tides of the battle... until Lee Sujin seals his Charyeok, and he audibly laments on the loss.

He is the strongest of Chungcheongbukdo Province, but was dropped out because of continuous stacked warnings due to his 'earwax' ritual. He was able to join the national league after the winner of Chungcheongbukdo province was assassinated. Yet, not much is told about Gi's style of fighting. It continues to change in a single round against Jeonranamdo participants. He easily knocks out Park Seungah.

He has a good stamina and was able to take many blows from Park Ilpyo and still be able to fight. He also has good reflexes and able to do counter attacks on Ilpyo successfully on a number of occasions.

Jack the Ripper: It looks like a middle aged man with long mustache, wearing hat and long coat. It gives Gi the ability to form huge blades to attack the opponent. Charyeok can also use its body to form blades to attack an opponent at close range. After the time skip Gwum Gi demonstrated new ability to protrude larger blades from his own coat, which he used to stab Priest Kim Satgat. This is due to his communication with his Charyeok god, who not only gives power but also wisdom. But, due to Gi's big ego, he prevents himself from further increasing his synchronization with his Charyeok. 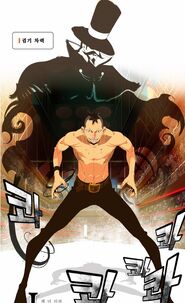 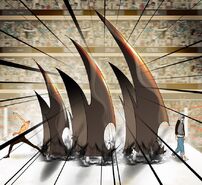 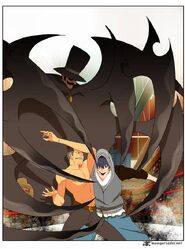 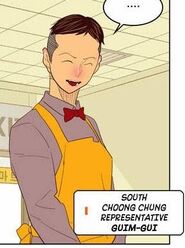 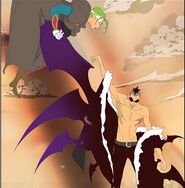 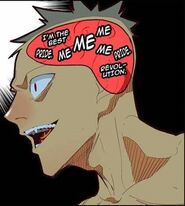