Original Greed (탐 - 오리지널 (貪), "Tam - Orijineol") is a variant of Greed utilised by Ultio R and the Morning Crows.[1]

Greed is a Charyeok that is fused into its host's body and was created by The King in order to gain eternal life, along with Dante and Rough Energy Stone.[1] Creatures like Ultio R are The King's attempt to combine various aspect of these into one being, but eventually scrapped after The King considered them failures.

Like its later variant, it takes the form of black blob with black eyes, red irises, and teeth covering the user's shoulders and arms.

Original Greed is very powerful, allowing two Priest-level users to hold their ground against Bishop as powerful as Romario Traviola. It has all the power of Greed produced by Nox, in addition to some other powers.

Enhanced Erosion: Original Greed, the one R was born with, has an even more eroding effect than the one used by Taek Jae-Kal. Bishop Byron commented that unlike the latter used Greed, this Greed's erosion is so powerful it can devour anything on earth.[1]

Implantation: At least one user displayed an ability to implant Greed into their attack as a way to surprise their enemy. 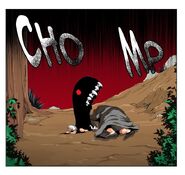 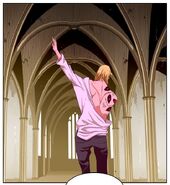 Original Greed being transplanted into several believers of Nox 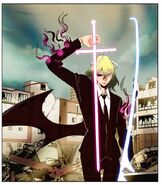 Original Greed on MacDonald, one of Morning Crows
Add a photo to this gallery

Retrieved from "https://godofhighschool.fandom.com/wiki/Greed/Predecessor?oldid=23801"
Community content is available under CC-BY-SA unless otherwise noted.