God's Blades (신의 칼날, Shin-ui Kalnal) is the Charyeok of Sang Man-Duk. This charyeok is one of, if not the, strongest because it summons gods rather than just borrowing a god's power, something which a human with taboo is unable to defeat.

It's appearance is unknown although Sang Man-Duk usually summoned giant winged creatures flying in the sky holding swords the size of a skyscraper. These creatures belonged to a race of minor god called Nephilim.

The charyeok manifested as a power to create and control blades/swords, in addition to summoning heavenly creatures such as nephilim and angels.

The Original Way Of Borrowing Power: By breaking the taboo the gods placed upon the user, He can enter a powerful form. Although only briefly seen, it has enough power to cause explosion and wounded three of The Six as well as moving at unimaginable speed. His price for breaking the taboo and using this type of Charyeok is accelerated aging. Xiao Chen stated that this original way of borrowing power is a combination of all strength of the bishops as one, making it the ultimate original way of borrowing power, at least for Nox. 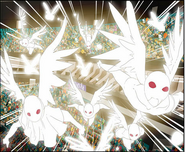 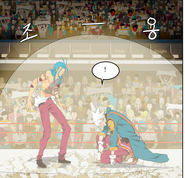 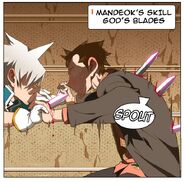 Name
Add a photo to this gallery

Retrieved from "https://godofhighschool.fandom.com/wiki/God%27s_Blades?oldid=29925"
Community content is available under CC-BY-SA unless otherwise noted.