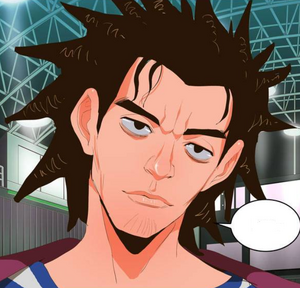 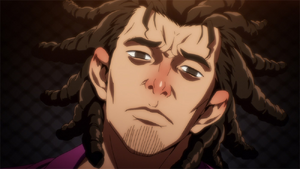 Imaruoka Atsushi (Japanese game)
Sugita Tomokazu (Japanese anime)
An Jang-hyeok (Korean anime)
Gang Manseok (강만석, Gang Manseok; "Manseok Gang") was a participant of G.O.H Tournament in the metropolitan region. He was a favorite to win until he was completely defeated by Jin Mori for using excessive violence. 17 years after the RagnarÖk, he follows his master, becoming a member of anti-government organization Balhae.

Manseok has a strong build and spiky hair. He was seen wearing a sweatshirt and the pockets were stitched with his hands inside. He also wore very heavy pants, which he removed in his final battle with Jin Mori.

Seventeen years after the events of Ragnarök, his overall appearance remains, though he now has light facial hair around his jaw.

He had a violent and a delinquent like personality and wanted to have his opponents beg for mercy in front of him. It was due to seeing his father begging to people that frustrated him, leading him to make others to do so. He also gets extremely violent when insulted. After being defeated by Mori, he has become scared of him and mumbles to himself "Monster".

He is later snapped out of this by Judge P, however, whenever Jin Mori is around, he will be completely subservient.

He holds Lee Sujin in high regards as his master, and always helped her whenever he could. He even shield her from a rock that about to hit her.

As soon as Manseok entered the preliminaries, Mori declared that he doesn't like him and saved Go Gamdo from Manseok. This increased the enmity between the two and it led to a fight. Later, during Manseok's fight, he was in control, but due to his violent nature he started torturing Gamdo. This angered Mori and he entered the ring to fight. The fight resulted in Mori utterly defeating Manseok and inflicting trauma upon him. Gang Manseok was in a state where he kept mumbling that Jin Mori was a monster before Judge P snapped him out of it. But still reverts to being meek whenever Mori reprimands him.

She was his master in Northern ITF Taekwondo that met with him years ago and trained him. Gang Manseok is grateful for this and humble around her, Although, it doesn't prevent him from teasing his master's cluelessness about the more modern South Korea. Gang Manseok always call her "master".

When Manseok was a kid, he always saw his father act tough in front of the weak, but when a stronger person appeared, his father would beg for mercy which made Manseok refuse to beg to anyone, believing it shows weakness.

Manseok later became a normal street thug, but one day he was ambushed and hospitalized for thirty weeks. In truth he had tried to mug Jegal Taek who he thought was just some 'country kid' from Busan on a school excursion to Seoul, yet it turned out that Taek was using the trip as a means to go challenge him, and subsequently hospitalized Manseok as well as became the only person he begged to. When Manseok was in the hospital, he was about to kill himself for his dismal failure when a mysterious person appeared and offered him the power to beat others. After going missing for a year, during which he was believed to have learnt Northern ITF Taekwondo, Manseok appeared at Busan High School to have his revenge on Taek, resulting in three hundred students getting seriously injured. Afterwards he got arrested and sent to a Seoul jail, where he was put in a straight jacket.

Manseok enter the God Of High School Tournament and was known to be the favorite to win the tournament due to his background and his talents. Manseok met Go Gamdo who he kick but was saved by Jin Mori. Manseok walk away from Mori, thinking he was a weakling and walk toward Yu Mira who he ask why she was here to which she ignorant him. Manseok then took Mi-Ra sword, thinking it should be with a man, but was later taken by Mori but Manseok kick Mori which made him bleed and sent him flying. But Mori came back and took back the sword again.

Both Manseok and Mori end up laughing but told him to stop laughing. Mira came behind Manseok and use Tong Be Kwon and did a air kick to Manseok face, but Manseok remain harmless and look at her panties which made her blush. Manseok start liking Mira even more and ask her out, but Mori came and pull down Manseok pant which didn't made Manseok upset and told him the inside count and if he wanna see which made Mori put his pant up fast.

Manseok start attacking Mori and sent him flying again but Manseok ankle was broken thanks to Mori. Manseok then ask for Mori name which the latter will tell him if he beat him. As both Mori and Manseok were about to crash to each other, Mira came in and break Mori for putting her sword into his mouth which ended the fight and let Manseok enter to the real battle. Manseok next fight is with Gamdo where the match start when Gamdo start using several attacks against Manseok and sent him off stage.

Manseok then got up and went back to the stage, but Gamdo give him a strong kick which Manseok broke free from his jacket and use his free hand to block it. Manseok rush in and grab Gamdo hair and toss to him to floor to kick him. Gamdo was now injury and toss to the floor, Manseok went in close to and start attacking Gamdo, Gamdo try to use what his master once taught him but all it did made Manseok tickle. Manseok mention that he felt the shockwave Gamdo sent out, but Manseok bounce it back to Gamdo to avoid the damage. Manseok then mention he didn't use it on Mira because he didn't wanted to hurt her and told everyone to quit now if they are afraid of him.

Manseok then grab hold of Gamdo and give hitting him until he bow his head to him to which the latter refuse to bow his head. Gamdo try to punch Manseok, but miss and made Manseok to get out his other arm and put him in a arm lock. But then Jin Mori enter the ring again and punch him which sent him flying a bit. When Manseok got up to strike again, Mori give him a kick which crack the ground, and defeating him.

But Manseok with dark smoke coming out of his legs and told Mori that he will not bow down to anyone ever again. Manseok summon all of his strength into one kick to kill Mori, but Mori counter attack it and defeat him with a special move. Manseok was then reported to be out of commission and end up mumbling to himself Monster, referencing to Mori.

We first see Manseok coming out of imprisonment with a wimpy figure stemming from his defeat at the hands of Mori. Manseok is then seen called by Judge P but is frightened by her and hides behind a tree she then tells him that Jegal Taek was killed at the hands of Mori, she then reassures his fears of well everything by telling him Mori was too strong. Two people are then seen threatening Manseok to call a taxi for them but Manseok was "reborn" and intimidated the hoodlums into getting him a taxi.

Manseok is a strong competitor in the Metropolitan region part of G.O.H Tournament. He is also known as one of the 3 Emperors in the whole country. He had a level of 12, depicting his strength. He was able to easily overpower Go Gamdo. His martial arts style is Northern ITF Taekwondo. He is a genuine fighter.

Superhuman Endurance: Manseok has shown remarkable endurance and stamina. Several times he has received massive injuries from opponents only to continue fighting despite pain and fatigue.

Superhuman Agility: Due to the natural strengthening of his body from training with his master he has superhuman agility. He is agile enough move any any position as he sees fit. He has shown the ability to effortlessly flip and jump around a fight using most surfaces to his advantage.

Superhuman Strength: Manseok has shown throughout the series a consistently monstrous degree of physical strength. Even with his arms restrained, he casually flung Jin Mori into a wall, cratering him on the impact. Against Go Gamdo, the latter was hopelessly outmatched, and once he stopped playing around he effortlessly countered his strongest attack with the Northern Wave Rebound. His Front Kick created a shockwave that destroyed the ring in the direction he launched it. After landing in Oraeguk, his Front Kick that he demonstrated against the Priests created a shockwave that dwarfed hills.

Superhuman Speed: Manseok has shown remarkable speed. When he dropped his heavy pants, his speed increased to a point where he could appear in the blink of an eye.