Fei-Long had a grayish blue hair and black eyes. He had both ears pierced, wore a black suit and had a swirling tattoo on the back of his neck.

Fei-Long was extremely sadistic and very dangerous. He also liked challenges in his work, and thought fighting weaklings as boring, which prompted him pick fights in order to relieve the stress.

Fei-Long was paired with Cao-Yuan to kill the winners of the regional tournaments. After killing Hahm Sug-Il of Chungcheongnam-do who he thought was a disappointment, he went to Gangwon-do in hopes of a real challenge against Gang Daehyop, only to find that none of the participants were Charyeok Users and that the winner was also weak. He and Cao-Yuan later headed for Jeju Island where they killed the whole winner team.

During the Nationals, Fei-Long used his stolen Doppelganger Charyeok to let his fellow Apostles assume the appearance of the slain Jeju Island team members so that they can participate in the tournament, though this lack a real fight made him attempt to pick a fight against Na Gidong. On the morning the Jeju Island team were to fight the Metropolitan team, Fei-Long assumed the appearance of the Jeju Island team member from whom he stole the Charyeok from, and before the match began successfully lured Jin Mori to an abandoned factory where a clone of Jin Taejin was held alongside the Jeju Island team member. After the clone's self-destruction grievously wounded Jin Mori, Fei-Long killed the remaining Jeju Island team member before creating multiple clones of himself to finish Jin Mori off, only to be badly beaten when Jin Mori blocked his sense of pain and unleashed his wrath. When Fei-Long regained consciousness later that night, he tried attacking Jegal Taek who had come to jeer at him, only to be devoured by his Greed. He was last seen half-emerging from Jegal Taek's body when the Greed became uncontrollable.

Fei-Long was one of the Elite Apostles assigned to be player killers and he was said to very skilled, since none of his team mates believed that he would lose to Jin Mori. He had a high level of 17.[1]

Despite this confidence in his abilities, he still got pushed around when he finally met Gang Daehyop, and ended up losing badly against Jin Mori before instantly taken out by Jegal Taek.

Doppelganger: Doppelganger was the Charyeok of Fei-Long. It was stolen by him from a Jeju Island team member. 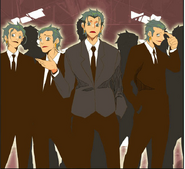 Perfect Copy
Add a photo to this gallery

Retrieved from "https://godofhighschool.fandom.com/wiki/Fei-Long?oldid=34071"
Community content is available under CC-BY-SA unless otherwise noted.