Lava-like heat
Nigh-Impossible to break out

Chapter 147
The Eight Trigrams Prison is a jail located somewhere in the Heavenly Realm. The jail is said to have lava like heat.

The Jail resembles a coffin with many chains holding it. It has openings on both it's sides and front, it resides over a large fire which heats the coffin to lava like temperatures

While not used offensively this weapon is extremely hard to break out of.

Heat: Inside the jail there is immense heat even stated to be lava like which is estimated to be 700 to 1200 degrees Celsius. 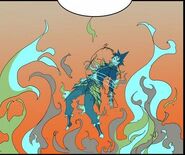 Inside the Eight Trigrams Jail
Add a photo to this gallery

Retrieved from "https://godofhighschool.fandom.com/wiki/Eight_Trigrams_Prison?oldid=34320"
Community content is available under CC-BY-SA unless otherwise noted.