The Dragons are a species of demons that is located in the Sage Realm and are one of the Holy Animals. They are a legendary creatures, typically with serpentine or reptilian traits, and are featured in the myths of many cultures.

Dragons in the Sage Realm are based off the dragons of both East Asian and western myth. The have serpentine bodies with triangular spines along their back, large canine teeth, white eyes, white manes, and horns. They have reptillian legs with four clawed toes. They are either blue with red spines or green with orange spines. the western ones possess wings and on one instance, shown with more than one head.

All dragons instinctively fear Garuda's presence, even after he died.

They appear to be quite aggressive and prone to using violence and kill those in their way. However, the blue dragon species has been shown to be quite friendly towards Jin Mo-Ri, whether they are docile by nature or if this is caused by Jin Mo-Ri's special qualities is unknown.

They are seen to be quite ferocious and strong demons. The abilities of a Dragon differ between classes, their specific races, and in some cases, the specific Dragon. All of them have demonstrated the power of flight and their own elemental breath weapon (either fire, ice, or lightning). When someone uses a dragon as their Charyeok their eyes change to match their dragon's, such as the case with Judge O and Sunny, and there dragons Chang-Sik and Thunder Dragon respectively. Judge O has stated and shown that he has to fight and tame his dragons in order for him to use their power, but it is unknown if that is a requirement everyone that uses a dragon Charyeok.

Tears: As a holy animal, dragon tears possess a healing quality to individuals, particularly humans who ate the Sage Pill.

Breath Attack: Each dragon has their own breath attack that is limited to it's race/type. The attack is very powerful and a barrier cannot stand it. One of the strongest is shown to be strong enough to completely destroy one of the swords from Sang Man-Duk's Charyeok.

Regeneration: At least some of the specific race is shown to have very high regenerative ability. Red Dragon quickly healed her body after Saturnn tried to destroy it from inside and the black dragon can regenerate after having their meat taken for food. 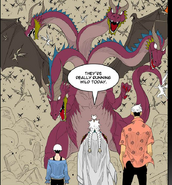 A dragon's regeneration
Add a photo to this gallery

Retrieved from "https://godofhighschool.fandom.com/wiki/Dragons?oldid=33505"
Community content is available under CC-BY-SA unless otherwise noted.