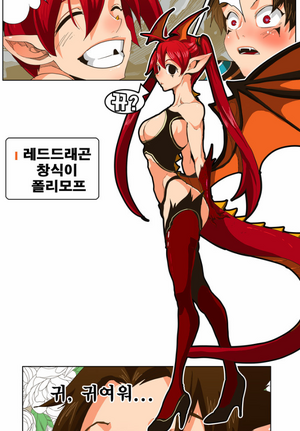 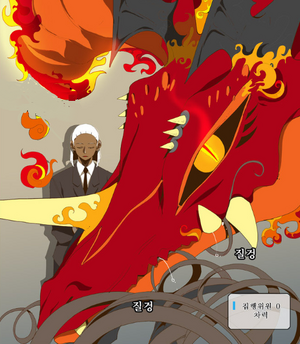 Chang Sik is a red dragon become Judge O's charyeok. She was killed after getting decapitated by one of Sang Man-Duk's sword, but was later reborn as a hatchling. Chang Sik is later revealed to be a female and is also a polymorph like Jang Ho-Sik.

Chang Sik is a large red-colored dragon. Her size is close to that of a tall multistories building. When reborn, the dragon comes back as a small circle shaped red dragon. As of recent chapters, her size is big enough to cover large part of Nox's cave.

In her polymorphic form, Chang Sik appears as a slender young woman with long red pig tails. She is missing one of her fangs (presumably it's the fang that Judge O used as Dragon Slayer Sword).

Due to the time she spent as his charyeok, Chang-Sik is close to Judge O and protective of him, and vice versa. She loves gold, and can be seen almost crying after doing a job and not being given one.

Red Dragon is O's charyeok and provides him with inhuman abilities. She is a fire Dragon and materializes after Judge O removes his limiter. If Chang Sik is killed, the dragon can be reborn a hatchling but the process takes at least two months.

Pyrokinesis: He gives O the ability to create and manipulate fire at will.

Regeneration: She has a very high regenerative ability and quickly healed her body after Saturn tried to destroy her from inside.

Polymorph : Like Ho-Sik, she has the ability to transform into a humanoid form.

Breath Attack: as a dragon, Chang Sik can unleash a powerful breath attack.

her love for gold is both a reference to european dragon myth that dragon guards gold treasures and J.R.R. Tolkien's dragons that loves gold treasures. 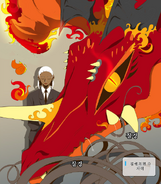 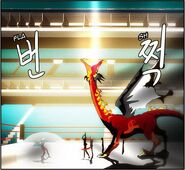 Breath attack in use

Dragon Slayer Sword
Add a photo to this gallery

Retrieved from "https://godofhighschool.fandom.com/wiki/Chang_Sik_(Red_Dragon)?oldid=28591"
Community content is available under CC-BY-SA unless otherwise noted.