Chapter 24 (Hooded)
Chapter 134 (Fully)
Byron was one of the five Bishops of the Nox organization.

He appears to be a man in his twenties with black hair at the sides of his head and white hair running through the middle tied up in a ponytail. He possess two small horns, shark like teeth, elfish ears, black eyes with red pupils and four dots below his eye. He also has a pair of wing like tattoos below the dots. He wears the typical attire of the Nox.

He is very sadistic and enjoys fighting strong opponents. He doesn't care for his allies and will resort to absorbing them to get stronger just to defeat his enemies. He like all the other Bishops of the Nox organization think of the creatures of the Sage Realm, a realm superior to them, as nothing more than mere monsters.

Byron is a powerful combatant, and has proven himself worthy of the rank of Bishop, seeing as Bishops are among the most powerful members of Nox . He uses a staff to fight which turns out to be his actual body and that the staff is Greed.

Superhuman Strength: Byron has shown a vast amount of physical strength. Byron has blown apart buildings even a city a size surrounding with a single slash. His strength can go on par with Uma in her sealed state. This is increased when he absorbs priests or powers from other persons.

Superhuman Speed: Byron has shown remarkable speed, several times he has closed the distance from opponents and appear near them in an instant. He has been shown to catch Mihu's attack with his bare hands instantly. This is increased when he absorbs priests or powers from other persons.

Superhuman Durability: He has has shown to be quite durable as he was able to resist all of Mihu's attacks and shown no damage. This is increased when he absorbs priests or powers from other persons.

Superhuman Endurance: Byron has shown remarkable endurance and stamina, seen by Uma repeatedly destroying his body and he still continue to attack. Although this body is a false one created to handle his true body, the staff.

Superhuman Agility: He is agile enough move any any position as he sees fit. He has shown the ability to effortlessly flip and jump around a fight using most surfaces to his advantage. This is increased when he absorbs priests or powers from other persons.

Greed: It takes the form of a glaive with multiple mouths on the bamboo handle and the blade. It is actually Byron's true body, having completely fused with him. If the human vessel is destroyed, Greed can recreate it by eating other beings.

Absorption and Assimilation: Greed eats other creatures in order to use their abilities, regenerate, and grow stronger.

Branches: Greed can grow "branches", offshoots of itself that it uses to overwhelm and latch onto its prey.

The Original Way Of Borrowed Power: Although unseen, Xiao Chen mentioned that he had access to this type of charyeok.

Byron after absorbing a horn from Uma 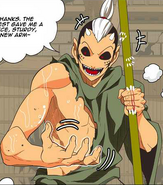 Retrieved from "https://godofhighschool.fandom.com/wiki/Byron?oldid=25588"
Community content is available under CC-BY-SA unless otherwise noted.