Chapter 40
Axley Ivanovic was a priest for Nox that had a big role in targeting the Judges and attacking Jin Tae-Jin. Later he become a part of Morning Crows, an organization that betrayed Nox to support Ultio R as the next emperor.

Axley has shoulder length blue colored hair and blue eyes. He wore a military type dress with a blue hooded cape as his priest attire. Later, on his mission, he is wearing civilian clothes.

Axley has a focused personality and tries to do his best to finish his missions. He has some compassion for his team mates, as he saved Saturn when he was defeated and was angry when Q mercilessly attacked McDonald.

He was first seen when a group of Priests attacks Jin Tae-Jin to force him to make an alliannce with them. When Tae-Jin refuses, they attack him but most of the priests end up dead by the latter's attack. Axley, Saturn and the remaining priests try to attack but are stopped by the Bishop who decides to fight himself.

However, not even the Bishop was capable of taking down Tae-Jin. Since, he was weakened by all the attacks and the poison, they overwhelmed him with their sheer numbers.

While the Nationals were in progress, Axley and Saturn were sent to defeat Judge Q. Axley buys some casual clothing for himself and Saturn and gives her a lollipop to keep her quiet. They later go to Q's house but after coming in contact with the house door, Axley finds out that a barrier is in place and there is already someone inside. They enter and find out that Drake McDonald is fighting with Q. Axley stabs Q with his sword to save McDonald and overpower Q, but their victory is short lived due to the arrival of Judge O.

While O stops their second attack and fights Saturn, Axley attacks Q to save McDonald from further injuries. He clashes with Q multiple times but they are evenly matched until Q uses his cards. One of the cards get stucked in Axley's wing. Q, then summons the Joker from the card and stabs Axley from behind, also cutting one of his wings in the process. Axley sees that Saturn also lost to O and decides to retreat for the time being. When he is escaping, O throws his Dragon Slayer sword at him, but McDonald changes the position of the sword and decides to kill Q and O along with him. Thus, Axley and Saturn escape.

They were later seen fighting with Yu Mi-Ra and Han Dae-Wi. After chasing them into a underground tunnel, they're attacked by Jin Mo-Ri. His attacks ends up killing and injuring a lot of priests. Axley tends to the wounded, as the Bishop goes after Jin Mo-Ri.

Axley is a priest and uses a broadsword for combat, which he is very proficient with, and was able to fight on par with Q. It seemed to be a National treasure as it came back to his hands. He has a good endurance for injuries as he was one of few able to survive after Tae-Jin's attack. Later, he was able to escape with Saturn even though he had multiple stab injuries from Q's scythe and lost one of his wings.

Shield of Discrimination: Axley's Charyeok is a pair of shiny white wings. As the name suggests, these wings can act as a shield and block opponent's attacks. It is shown that the wings can't be regenerated after being cut.

Original Greed: as part of Morning Crows, an assembly of believers and priests that supported R as the next jade emperor, Axley was granted the original greed, one harvested from R's own body.

Axley is in the possession of a National Treasure known as Durandal. It seems to be quite famous as Moon Gi-Joo lamented the fact that it is in possession of Axley. 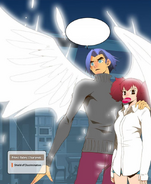 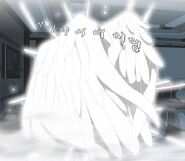 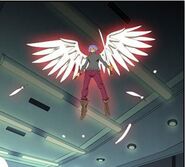 Sword Teleportation
Add a photo to this gallery
Retrieved from "https://godofhighschool.fandom.com/wiki/Axley_Ivanovic?oldid=23465"
Community content is available under CC-BY-SA unless otherwise noted.